Jhulan Goswami finished what she started as India ended Australia’s 26-match run of consecutive ODI victories after another thrilling contest in Mackay.

Having bowled the fateful final over in Friday’s great escape by the hosts, Goswami (3-37) delivered a terrific new ball spell on Sunday morning. She then smote a straight boundary to snatch the win with three balls to spare, ending an Australian streak that began, also against India, in 2018. 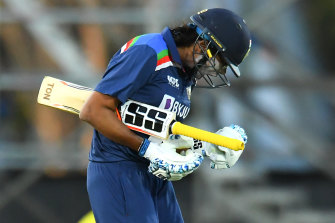 “I think to be honest it was inevitable at some point that we were going to lose a game,” Australia’s captain Meg Lanning said. “I just think the class of the teams out there at the moment, it’s always a very close contest and there’s no easy wins.

“So to have the streak as long as we did, I think is an amazing effort over a long period of time. We go out there to win every game and unfortunately didn’t quite get it done, India were too good, but it doesn’t change our mindset in terms of trying to win.”

Defeat was not the only setback for Australia. Rachael Haynes, Beth Mooney and Sophie Molineux all suffered injuries just three days out from the Test match on the Gold Coast.

While Molineux’s cut to the face resulted primarily in an awkward bandage that left her breathing through her nose in the final overs as she toughed out a closing spell of left-arm spin, Haynes’ hamstring strain looked particularly serious.

That injury, suffered in the early overs of India’s pursuit of 265 to win, hastened Mooney’s departure from the scene on a precautionary basis when she too twinged a hamstring in the field, albeit with less immediate seriousness.

This was otherwise a halting performance by the Australians as India continued to improve: they required salving middle order innings by Mooney (52), Ash Gardner (67) and Tahlia McGrath (47 from 32 balls) to set a competitive total, and then leaned heavily on debutant Stella Campbell (1-41) and the recalled Annabel Sutherland (3-30) with the ball.

Though they gave up 31 wides, Australia’s higher quality fielding and catching had appeared likely to be the difference. Sutherland and the substitute Molly Strano each held on to half-chances after India had put down four catches that really should have been taken.

Instead, the wheel turned. Nicola Carey put down Sneh Rana at square leg when looking directly into the sun, then next over had Rana’s return catch cancelled out by a no ball. Rana then slammed 14 runs from the 47th over delivered by McGrath to give India the breathing room they required.

Choosing to bat first after needing a marginal no-ball call to complete a rather miraculous escape act in game two on Friday night, the hosts were motoring at 0-41 after eight overs.

However, Goswami had been putting together an exemplary few overs, and Haynes’ mounting frustration culminated in a failed attempt to hit India’s seasoned seamer off her length and a simple catch to mid-off. When Lanning edged a beautifully pitched away nibbler four balls later, India were in the game.

Alyssa Healy (34) was unfortunately run out by an Ellyse Perry drive deflecting onto the non-striker’s stumps. Perry (26) then cut straight to backward point to also squander a platform, leaving Australia an unsteady 4-87.

Mooney, Gardner and McGrath each summoned innings of escalating speed, helped by no fewer than four catches going down at moments when India might have reclaimed control. The most glaring of these was Richa Ghosh’s inability to hold a swirling skier from Gardner despite having the gloves on. 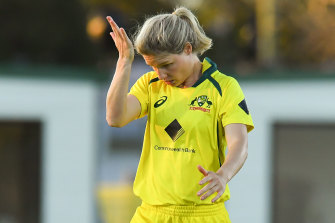 Nicola Carey reacts during Australia’s first loss in an ODI since 2018.Credit:Getty Images

In all it added up to 5-177 from the final 25 overs of the innings, making for what looked an eminently defendable total. Another untidy start with the new ball by Australia gave India a nifty start. It took a blinding catch by Sutherland, sprinting with the flight of the ball from mid-off, to see off Smriti Mandhana after a stand worth 59 at nearly a run a ball.

Shafali Verma, batting well within herself, put on a century stand with Yastika Bhatia to pull the Indians to only 105 runs short of victory and well ahead of the required rate as the Australians, too, shelled a couple of (more difficult) chances.

Molineux found a way through Shafali (56) though, and after Richa ended a wretched day with a duck, Strano’s superlative diving snare running in from fine leg accounted for Bhatia (64) and tilted the game towards Australia.

The outstanding spells of Campbell and Sutherland, who bowled Pooja Vastrakar and the captain Mithali Raj in successive overs of suffocating seam-up, seemed to ensure Lanning’s troops had enough scoreboard pressure to keep the streak going.

Rana had other ideas. Twice given a reprieve by Carey, she cuffed the vital boundaries to mean Goswami could celebrate, just two nights after having victory spirited away. Never before had India chased so many runs to win an ODI.