Australia will enter the Boxing Day Test unchanged barring an 11th-hour hiccup but coach Justin Langer accepts pressure is on the incumbent batsmen to shore up their spots given David Warner's looming return to the national side.

Having routed India at Adelaide Oval last week, the Aussies are set to back in the same XI to do the job at the MCG after opener Warner failed to recover from the groin injury which kept him out of the series opener. 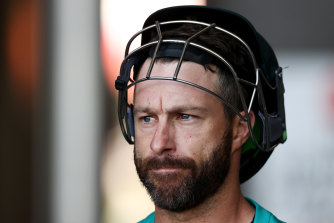 Matthew Wade has stepped up to open for Australia in David Warner’s absence.Credit:Getty Images

However Langer said on Thursday that team management was hopeful the former vice-captain would be available to be included for the third Test of the series, currently scheduled for the SCG.

With Will Pucovski sidelined through concussion, Matthew Wade was elevated to open alongside Joe Burns at Adelaide Oval. Wade, Burns, vice-captain Travis Head and young gun Cameron Green are all under pressure to retain their spots given the looming selection squeeze when Warner is again fit to play.

"That's all part of the journey of every individual player," Langer said.

"You are literally under the pump every time you play for Australia. Every player is, that's how it should be. It's so healthy for Australian cricket. It's tough when you're in the top six batters because you've always got people knocking hard on your door to take your spot, so you've got to be on your toes all the time. And equally for the guys outside, you've got to bang so hard to get an opportunity. It's really healthy. Having lived in both sets of shoes, it's one of the great things about being an Australian cricketer. Everyone knows where we're at. These things have a funny way of working themselves out and the guys who are making runs, they'll keep getting selected, that's usually the way it works."

Warner is yet to rejoin the national squad, remaining outside the team's bio-security bubble along with paceman Sean Abbott, having spent time in Sydney recently.

But Langer said Warner was on the mend and could be back for the third Test.

"He's got so much energy and passion for the game and he'll be doing everything possible to get out onto the ground. Fingers crossed. He's having a bit of trouble running at full speed. When he gets back and feels confident with it, of course he'll come back into our team. We'll just monitor him and fingers crossed he'll be back. It's not just for our team. Everyone loves watching him play cricket. It's great for the theatre and the performance, the entertainment of Test cricket."

Langer said that there was no reason to alter the line-up that defeated India by eight wickets in the pink-ball Test, having skittled the tourists for 36 in their second innings. It was India's lowest total in their proud Test history.

The coach meanwhile called on umpires to use more common sense in the absence of the decision review system in the Big Bash League, which has been marred by several umpiring howlers in recent days.

"In the ideal world of course there'd be DRS, but I also live in a world of huge costs. This summer, hopefully the revenue will stay pretty constant but there's huge costs. And with costs, like running any business, you've got to work out what the priorities are. But I also think that with technology as we have it, there's got to be some common sense.

"In my view, if a batsman is walking off and it is that obvious there's no reason the third umpire couldn't [overturn it] because that's common sense. It might take away a bit of the angst. In a perfect world DRS is in, yes, but I get the bigger picture of the expense that requires."