It is never pretty when, just two Tests in, an Ashes tour reaches the Pom-pitying stage. But already the chasm in class between these sides is so yawning, Australians broach the subject to English visitors in the manner of bereavement counsellors. “I won’t talk about the cricket,” Chris Smith, the Sydney radio presenter, assured me, after we had finished a breakfast discussion on Monday. “It’s not looking too rosy for you blokes. Maybe Melbourne will be different – let’s hope so.”

Perhaps it will, although early series implosions tend to generate an irresistible momentum. Home advantage exerts such decisive influence that neither country has ever surmounted a 2-0 deficit during an overseas Ashes. 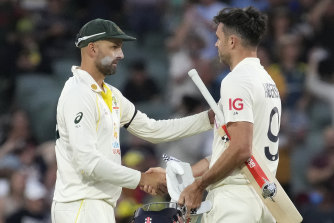 England, down 2-0 in the series, are being killed with kindness.Credit:Getty Images

When England’s sole hope of sustaining the contest until the Boxing Day Test rested on Jos Buttler claiming a single off the last ball of every over to keep the strike, it was a fair sign their race was run. The Australians knew it, too, Mitchell Starc joshing with Stuart Broad in the comfort that it was never a question of whether they would polish England off, but when.

After all, there were 23 overs still to play in the Adelaide twilight by the time Buttler stepped back on to his stumps. As the fateful red lights flashed, an unusual reaction could be heard from Australian commentators, conveying not triumphalism but sympathy.

His verdict was as magnanimous as it was accurate: Buttler played brilliantly against type for his 26 off 207 balls, transforming himself from arguably the most destructive force in white-ball cricket into a latter-day Mike Brearley. Still, it was disconcerting to hear voices here being quite so compassionate about his fate.

For, as Ashes tourists, the English would far rather be the subjects of mockery than condolences. When Broad found his name excised from Brisbane media coverage in 2013 after refusing to walk, he could regard it as a badge of honour. Australians, scarred by his 22 wickets in their 3-0 series defeat three months earlier, were fearful of what he might do to them.

The fact that there is no such goading today suggests that they no longer regard England as a threat. And why should they?

In the nine Ashes series held in Australia since the Mike Gatting-led successes of 1986-87, the home team has won 30 Tests to England’s six. The margins of victory on this tour, by nine wickets at the Gabba and 275 runs in Adelaide, almost flatter the losers. It is hardly as if Joe Root’s players can blame the hostility of the Australian crowds. While fans at the Adelaide Oval could be rambunctious, one gentleman on the northern mound hitting the deck face-first after sculling multiple lagers for his friends’ benefit, they had nothing on the Hollies Stand at Edgbaston in full cry.

The problem is that England are simply not giving their hosts the challenge they crave.

As such, Australians are resisting kicking their opponents while they are down. This fits the model of captaincy established by Pat Cummins, who said in his opening address last month: “I think we’ve got to be a bit more understanding at times.” What was once a collection of incorrigible provocateurs – think back to Michael Clarke warning James Anderson to expect a “broken f—— arm” – has evolved into one of bleeding hearts. 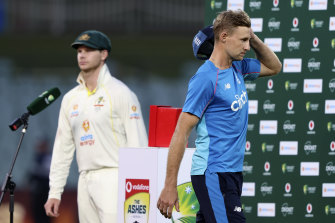 Joe Root, right, walks off the podium as his counterpart Steve Smith speaks.Credit:AP

Despite facing one of the worst England teams in living memory, stand-in captain Steve Smith has been scrupulously diplomatic, commending Buttler in particular for his resilience. If they have any sense, England should see such remarks as indictments of their inadequacy. In the Ashes, it is far more reassuring to be teased than it is to be damned with faint praise.

The teasing is what builds defences in a player, stirring the appetite for a response. Eighteen months after being derided in Queensland as “the 27-year-old medium pacer”, Broad blew away the Australians at Trent Bridge with figures of eight for 15. The only reason England are being spared abuse this time is because they are not good enough to offer a genuine rivalry. The same rule holds true in many sports.

It was no coincidence, for example, that the great former Manchester United manager Sir Alex Ferguson forged his closest friendships in management with men such as Sam Allardyce and David Moyes, whose teams were never likely to pose a direct challenge to United’s dominance.

“England are a good side,” Smith said, as he tried to galvanise his players for Melbourne.

Except England are anything but a good side. Smith is simply buttering them up because Australia are in such serene control of the series.

Having been outclassed in every department on the field, England now confront the final indignity of being killed with kindness.