Australia’s Test stars could be in action just days after leaving hotel quarantine as part of a fixture logjam which will test the country’s elite pace stocks. 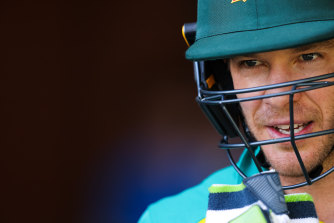 Australian captain Tim Paine will lead the side in his hometown for the first time.Credit:Getty

The men’s Test season starts in Hobart on November 27 at Blundstone Arena with an historic game against Afghanistan. It will be Tasmanian Tim Paine’s first Test in charge at his home ground.

The Ashes opener starts on a Wednesday at the Gabba on December 8 before heading to Adelaide for a day/night match starting December 16 and the traditional Christmas and New Year fixtures in Melbourne and Sydney.

As reported last week by the Herald and The Age, Perth will host the final Ashes Test for the first time since the 1994/95 series.

The Hobart Test is likely to be held just days after players complete quarantine after the T20 World Cup. Though the date for the final of the global tournament is yet to be confirmed, it will be a tight turnaround.

Australia’s men also play New Zealand in three one-day internationals and a T20 before their season rounds out with five T20s against Sri Lanka.

South Africa had been slated to tour but a clash in schedules magnified by the pandemic means they will remain at home.

“The men’s Ashes is one of the great global sporting rivalries and seems to grow ever larger with each series and generation,” CA’s interim chief Nick Hockley said. “We cannot wait to host England over five Tests this summer. The most recent Ashes series was a remarkable contest that captured the imagination of the entire cricketing world and I expect this summer to be no different.

“In a perfect world, we would welcome the Barmy Army back to these shores for a summer of singing and sportsmanship. Of course, we will be guided by the Australian Government on all things related to international travel.

“We are also incredibly excited to welcome Afghanistan to our shores for a historic first Test match against Australia. The story of the Afghanistan cricket team is one of the most uplifting in international sport, and their record of three wins from their first six Tests prove they truly belong at this level.

“The men’s international summer concludes with a feast of white ball cricket against the formidable New Zealanders and Sri Lankans, both of whom have huge followings in Australia. Both series will be keenly contested and serve as excellent preparation for the T20 World Cup in Australia later in the year.”

Australia’s women will again start the home international season starts, this time with matches against India, though the schedule for these games is to be finalised.

The highlight of the women’s summer will also be the defence of the Ashes urn, starting in Canberra with a Test on January 27.

Under the multi-format system in the women’s Ashes, the two teams then play three Twenty20s and three one-day internationals.

“Not even a global pandemic could stop the momentum created by the Australian women’s team after the record-breaking T20 World Cup in 2020,” Hockley said. “Australia’s favourite national sporting team will face off against two of its biggest rivals this summer.

“A series against India, an Ashes, a World Cup and a Commonwealth Games represents an enormous challenge for the Australians, but Meg Lanning’s squad has proven time and again that they thrive in the most competitive of environments.”