Few sounds signal the arrival of English springtime quite like the crack of leather on willow as the cricket season gets under way.

But in a development destined to send shudders through the nation’s pavilions, Cambridge University has suggested that cricket bats should actually be made of bamboo. 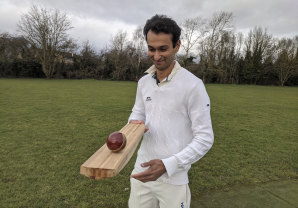 Darshil Shah is the co-author of a paper looking into replacing willow with bamboo as a material for making bats.Credit:AFP

According to researchers at the Centre for Natural Material Innovation, bamboo cricket bats would be lighter, stronger and offer a larger “sweet spot” – the point from which the ball achieves maximum acceleration.

Dr Darshil Shah, a former member of Thailand’s under-19 national cricket team, and Cambridge researcher, said: “The sweet spot on a bamboo bat makes it much easier to hit a four off a yorker for starters, but it’s exciting for all kinds of strokes. This is a batsman’s dream.”

English willow has been the traditional choice for bats for more than 200 years, because it has porous, criss-crossing fibres, which give it strength, while also holding air pockets which deform when hit to increase resilience and lessen vibrations. Makers originally used the sturdy willow heartwood, but had switched to the sapwood by the end of the 19th century to make the bats lighter.

When researchers at Cambridge tested bamboo prototype bats, they found they were twice as strong as willow, meaning they could be thinner and lighter. They also found bamboo was 22 per cent stiffer than willow, which increased the speed at which the ball left the bat. And they discovered the sweet spot was about 2cm by 4cm, significantly larger than on a typical willow bat, and positioned closer to the toe, making yorkers (a ball bowled at the batsman’s feet) easier to hit accurately.

The study points out there is a shortage of quality willow in England, which takes up to 15 years to mature to the point where the wood can be used to make cricket bats.

By contrast, Moso and Guadua, the two most suitable types of structural bamboo, grow abundantly in China, across South East Asia and South America, and mature twice as fast as willow. Bamboo was also shown to have a similar “damping ratio” to willow, meaning that a similar amount of force was transferred to a player’s hands when they hit the ball, so players would feel no more vibration.

Yet there are concerns that making life easier for batsmen would disadvantage bowlers. Michael Vaughan, the former England captain, told The Daily Telegraph that the Marylebone Cricket Club (MCC) would have to be sure that it would not give batsmen an unfair advantage.

There would need to be a regulation change as under MCC rules cricket bats must be made from wood, and bamboo is a grass. The debate around being able to hit the ball further echoes concerns seen in other sports such as golf and baseball, where technological advances have led to fears that some courses and stadiums are no longer big enough to accommodate events.

Dr Shah added: “There would need to be discussions with the MCC but we think playing with a bamboo bat would be within the spirit of the game because it’s a plant-based material and cane, a type of grass, is already used in the handle.“

But what about the much-loved sound of leather on willow?

“We tested that, too,” said Ben Tinkler-Davies, co-author. “The frequency when willow strikes the ball is very similar – whether you’re playing or spectating, you wouldn’t notice much of a difference.”

And for those people still left feeling that a bamboo bat is “just not cricket”, Dr Shah added: “Tradition is really important but think about how much cricket bats, pads, gloves and helmets have already evolved.”