The Marylebone Cricket Club has rejected bamboo bats as an alternative to willow, because bamboo is grass and not wood.

For the bats to be given the go-ahead, there would need to be an amendment to the laws of cricket, and the MCC has pledged to discuss this at the next laws subcommittee meeting. The MCC maintains cricket’s official laws. 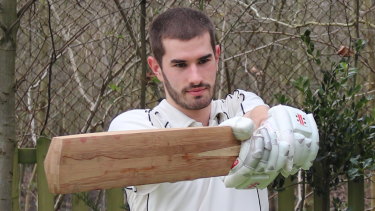 Co-author of the paper Ben Tinkler-Davies tries out a bat made from bamboo.Credit:Cambridge University

In a statement, the club said: “MCC has read with interest the research study from the University of Cambridge, which suggests that cricket bats made from bamboo offer a more suitable alternative to the traditional use of willow.

“Currently, Law 5.3.2 states that the blade of the bat must consist solely of wood, so for bamboo (which is a grass) to be considered as a realistic alternative to willow would require a law change.”

It was reported on Monday that a Cambridge University study indicated that a prototype bamboo bat had a larger sweet spot that performed 19 per cent better than a traditional willow blade, was 22 per cent stiffer, more sustainable and cheaper to produce.

Dr Darshil Shah, a former member of Thailand’s under-19 national cricket team, and Cambridge researcher, said: “The sweet spot on a bamboo bat makes it much easier to hit a four off a yorker for starters, but it’s exciting for all kinds of strokes. This is a batsman’s dream.”

English willow has been the traditional choice for bats for more than 200 years, because it has porous, criss-crossing fibres, which give it strength, while also holding air pockets which deform when hit to increase resilience and lessen vibrations. Makers originally used the sturdy willow heartwood, but had switched to the sapwood by the end of the 19th century to make bats lighter.