Justin Langer’s recent interview has further inflamed the intergenerational feud in Australian cricket, setting the scene for a tense start to the Test summer when players cross paths with their former coach in Perth.

Nick Hockley, Cricket Australia’s chief executive, came to the defence of the national men’s team on Wednesday, confirming multiple rounds of feedback had been handed to Langer, and saying he was disappointed by comments “unfairly criticising some of our players”.

In an interview published by News Corp on Wednesday morning, Langer claimed he had been left blindsided, thinking he was doing all the right things as coach, before stories began emerging about how the team was being worn out by his mood swings and volatility.

Langer has had numerous conversations in recent months with players, including Test and one-day international captain Pat Cummins, in a bid to mend fences after the fallout from his exit, but his latest comments have created fresh uncertainty about how ex-coach and current players will mix during the first Test of the summer against the West Indies next week. 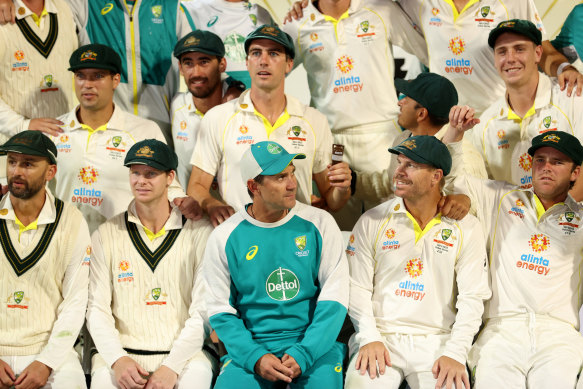 Justin Langer is set to cross paths with his former players next week in Perth.Credit:Getty

Cummins is said to be “nonplussed” by Langer’s remarks.

Team leaders stressed the need to avoid giving oxygen to past player discontent ahead of the one-day international series against England that began in Adelaide last week. Steve Waugh’s team dictum of “praise publicly, criticise privately” has sprung to mind for some.

Langer has taken up a new role as the star signing to Channel Seven’s commentary team this summer. Seven customarily tries to match players and commentators for interviews in a manner where all parties feel comfortable, a source with familiar with the issue told The Age and the Herald.

Hockley spoke to captains Cummins and Aaron Finch on Wednesday before issuing a statement defending the players.

“We have not commented to date other than to correct inaccuracies, of which there are a number in Justin’s comments,” Hockley said on Wednesday. “Regular formal and informal opportunities to provide and receive feedback took place throughout his tenure, which is consistent with a high-performance environment. Following a comprehensive process, Justin was offered a short-term contract extension, which he rejected.

“I am disappointed by Justin’s comments unfairly criticising some of our players. The playing group are aware they have my full support. After an excellent performance against England in the one-day international series, we are fully focussed on an exciting Test series against the West Indies and South Africa, with the first Test starting at Perth Stadium next Wednesday.”

Langer claimed the only thing he would have done differently as coach was to manage up to the Cricket Australia board with more frequent presentations. That was a surprise to past CA directors contacted by The Age and The Sydney Morning Herald, who stressed they had been in constant contact with Langer during his time in the job.

“I’m very self-aware,” Langer told the BackChat Sports Show. “My greatest weakness without question is that I hate losing. I did as a player, I did as a coach. It’s different in footy. And this happened when I coached Western Australia as well. When we lose I go quiet because I’m actually very introverted. I’m a thinker, I’m curious, I wonder how we can get better, so I go very quiet.

“I don’t rant and rave and get angry, but I go very quiet. And then people, when I go quiet, because I’m meant to be the tough guy, even though I’ve got four beautiful kids, I love them, I love my garden, I love meditating, I’m the tough guy. That’s perception, he’s the martial artist and all that sort of shit. So when I go quiet people go ‘oh he’s not approachable’ and I go ‘yeah ok, that’s just after the game, give me 24 hours to absorb it all and work out how we can get better.’

“Yeah I’m quiet, I’m not a ranter and raver, I don’t get angry, or very rarely get angry. That’s not my style. But I go quiet and I know that, that’s my weakness. And the players go ‘oh yeah he’s angry, he’s intense’, I’m just thinking. Then I’ll go away and meditate the next day and then I’m up and back into it. That’s my weakness. And it’s very hard to change your personality.”