The Sheffield Shield clash between Victoria and Western Australia at the MCG has been abandoned, plunging the venue into crisis less than three weeks before the summer's showpiece cricketing event.

Play had been abandoned on Saturday afternoon on day one of the match with WA 3-89 because the pitch was deemed dangerous and unsafe.

The issue was too much moisture which led to divots in the drop-in wicket, creating uneven bounce and concerns for the batsmen when the divots hardened under a baking sun. 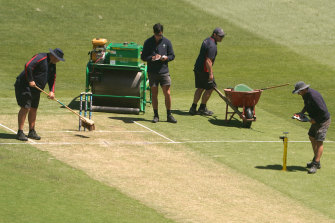 Ground staff inspected the pitch after play on Saturday.Credit:AAP

WA pair Shaun Marsh and Marcus Stoinis had been hit by deliveries from Victorian paceman Peter Siddle on Saturday and had to have concussion tests.

After an inspection on Sunday morning before play was to due to resume at 10am, WA captain Marsh and Victorian counterpart Peter Handscomb agreed the pitch had not improved sufficiently and the match was called off. Match referee Bob Parry and umpires Phil Gillespie and Geoff Joshua had all come to the conclusion on Saturday that the pitch had been unsafe.

The drama has heaped more pressure on ground curator Matt Page and sparked more worries about the pitch to be used in the Boxing Day Test against New Zealand.

That pitchwill be different to the one used in this game, but adds to concerns given the pitch used there for the Ashes Test in 2017 was rated poor by the International Cricket Council and last summer against India had only improved to a rating of average.

The middle strip is being prepared for the match against New Zealand.

Melbourne Cricket Club chief Stuart Fox remains confident a good pitch will be delivered for the Test against the Black Caps, at a time whent he venue has invested millions of dollars in upgrading the drop-in pitches, although new surfaces won't be ready for another couple of years.

On Saturday, Marsh said he was hit about "four or five times" while Stoinis was hit on the grill and also on the chest by fast bowler Andrew Fekete.

Handscomb had complained after last week's drawn shield clash with NSW that the pitch used had failed to deteriorate.

CA was clear in its message on Saturday night.

"We're very disappointed at today’s play being abandoned in the Sheffield Shield match between Victoria and Western Australia,” Roach said.

"But we also acknowledge that there have been two previous Shield matches at the MCG this season without incident. Matt Page and the MCG ground staff have more than two weeks to ensure the Test surface, which is a different pitch strip to the one being used in this match, is of international standard.

"We will seek to better understand the issues that resulted in variable bounce at the MCG on Saturday. We will also work closely with MCG ground staff in the lead up to the Test match."