On plenty of South Asian tours, Australian players can become exemplars of the thousand-yard stare, brought on by hard-turning wickets and wily spin bowlers who quickly scrambled best-laid plans. 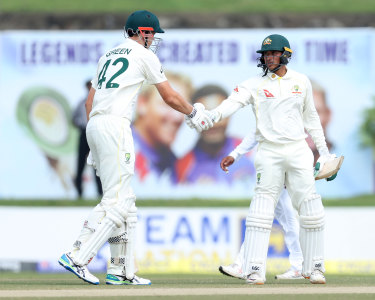 Usman Khawaja and Cameron Green committed to their plans to succeed on a raging turner.Credit:Getty Images

Until this match, Usman Khawaja too had experienced similar moments, twice touring Sri Lanka without passing 26 in a Test innings here.

But he, Cameron Green, Alex Carey and late on, captain Pat Cummins, all contributed to one of the most proactive Australian innings on a spinner’s pitch anywhere. Constantly harried by dancing feet, hard reverse and orthodox sweeps, or deft deflections for singles, Sri Lanka’s bowlers did not bowl a single scoreless over all day.

For Khawaja, it was vindication of the team approach he and other players had been hoping for over several years. Essentially, that individual players will be backed to form their own plans, and then left to persist with them even if they do not work out immediately.

As far as success in Asia is concerned, Khawaja said a lot of Australian coaching orthodoxy was “bull crap” next to the reality. “The way the guys have played and how we talk about the game and playing in the subcontinent’s changed a lot since I started playing for the Australian cricket team,” he said. 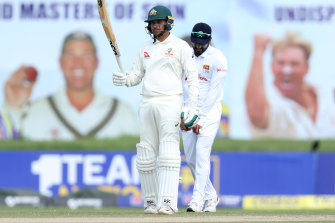 Usman Khawaja brings up his 50 in Galle.Credit:Getty

“I think we’ve learned from mistakes, I think guys are more trusting of their plans and able to adapt to different situations and bowling, and bat very differently from the way we do in Australia. When you see someone like Carey come in and sweep, even me as a youngster, the amount of times growing up I got told not to sweep the ball in Australia, it was every second coach telling me.

“Even Greeny doing it now, the amount of times I’ve heard people say ‘you’re a tall bloke, just hit down the ground’, it’s just the biggest bull crap in the world. If a player has the ability to sweep, whether he’s six foot seven or five foot five it doesn’t really matter, it’s still a shot in your repertoire. It’s actually even more potent when a taller person does it, as we’ve seen Matthew Hayden do in the past.”

Accompanying that mindset is a sense of perspective about hard conditions. When Khawaja was beaten by two prancing off-breaks either side of nearly being bowled by a ball of similar line that skidded on straight and low, he laughed.

“The smile on the face was because it was so hard,” he said. “If it’s not hard and you’re expected to score big to get into the game, you’re probably concentrating a bit more. I was just laughing because of what the balls were doing and everything going on.

“If you try to block on that wicket too often it’s almost goodnight. The guys have done extremely well to get 300. I was joking around with the boys saying I think we scored 240 last time we were here for the whole game, so we were one step up on that one.”

One step up on Sri Lanka, too. For all the talk of treacherous turners and mental hangups for Australia’s top seven, their proactive play switched the pressure back onto a home side lacking a senior spin leader. Their most senior tweaker, Lasith Embuldeniya, is now facing the questions often asked of touring batters.

“The issue with Lasith started in Bangladesh,” said Piyal Wijetunga, Sri Lanka’s spin coach. “Prior to that he had done pretty well in the West Indies series. After he bowled yesterday, I had a chat with Lasith. He bowled well in training. The problem is when he goes out to battle. It’s a matter of handling the pressure I feel.

“Australia had a plan and as soon as they saw the wicket was spinning they started to sweep and reverse sweep. They’re succeeding in doing so. The credit should go to Aussie batsmen as they handled spin better than our batters.

“When something of this sort happens, the player has to sort it out. A spinner more than a fast bowler or a batsman needs to be mentally strong. We need to address that issue.”

No thousand-yard stares for Australia then, only calm focus on the next ball.