The Test career of mis-firing opener Joe Burns may be over after he was axed for the final two Tests against India, as Australia unveiled a refreshed 18-man squad in a bid to recapture the Border-Gavaskar Trophy.

The national selection committee of chairman Trevor Hohns, George Bailey and coach Justin Langer met on Wednesday morning, coming after a stinging eight-wicket defeat inside four days in the second Test at the MCG.

Burns' summer of woe included 63 runs in four innings through two Tests, including an unbeaten 51 in the successful run chase of Adelaide. But his fate was sealed when he fell without scoring on Boxing Day and for four in the second innings in a knock where former Test captain Ricky Ponting said the Queenslander had been in "sheer panic" in a brief but eventful stay. 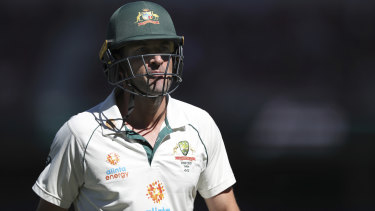 In 23 Tests, Burns has averaged 36.97, with four centuries, but has been unable to rubber-stamp his spot in a handful of stints.

Hohns said on Wednesday that Burns would now return to the Brisbane Heat in the Big Bash League.

"Unfortunately, Joe's returns haven't been what he or the selectors would like or what we consider he is capable of," he said.

Hohns said veteran opener David Warner had made "strong progress" in his return from a groin injury and is set to be cleared to rejoin the squad's bio-secure bubble from Thursday. Warner appears set to play in next week's third Test at the SCG.

"David … will be given every chance to play in Sydney with another seven days until the match," Hohns said.

Fast-bowling allrounder Sean Abbott has recovered from a calf strain and will also rejoin the squad.

Warner will surely help the home team improve a sluggish run rate which averaged less than 2.5 runs per over in Melbourne, continuing India's hold in this regard from Adelaide and even their tour here two years ago.

Matthew Wade, although he has performed admirably at the top of the order in a makeshift role, could return to the middle order, if Travis Head, whose dismissals in the slips and gully region have become all too familiar, is dropped.

Another option is to hand Will Pucovski a debut. While he is symptom free, he needs to pass the return-to-play protocols after the ninth concussion of his young sporting career.

"He will be fit to play in Sydney subject to completing the return-to-play protocols and an independent assessment," Hohns said.

One former senior player said if Pucovski was cleared and was deemed the best option, the risk of the Victorian being hit again was nullified by having access to a concussion substitute, which would be Marcus Harris, who is in the squad.

Amid the selection debate, the Australians are "super confident" they can still regain the Border Gavaskar Trophy but former Australian coach John Buchanan warned the top order must stop putting the entire team under "unnecessary pressure".

"It is the batting of the top six that is the concern. Without some surety there it places everyone in the team under unnecessary pressure. That is, when the openers begin an innings, there is even more importance on them getting a good launch pad due to the brittleness to follow," Buchanan said.

"When catches come along, there is more need to hold onto them because runs are so important as there is no confidence in the batting line up to chase or set. And the bowlers are constantly trying to not only take wickets but stem the flow of runs as they also have shaken expectations about what the batting line-up can do."

Buchanan, who guided Australia through a legendary winning era, said Burns had been "unable to repay that backing with the necessary runs", but also pointed to Head, Wade, Marnus Labuschagne, Cameron Green and Steve Smith – in that order – as having failed to provide what was needed.

Dealing with a series locked at at 1-1 apiece, vice-captain Pat Cummins denied the tourists suddenly had a psychological hold on his team, and pointed to Australia's formidable record at the SCG and the Gabba – where the final two Tests are set to be held.