New Zealand’s T20 rain-affected victory over Bangladesh was briefly halted on Tuesday night because of a DLS maths mix-up.

The hosts’ innings of 173 had been cut to 17.5 overs because of the rain in Napier, which left Bangladesh initially chasing a revised target of 148 from 16 overs. 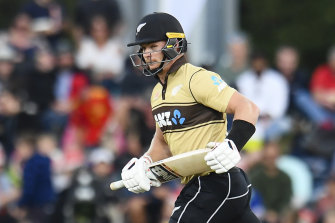 Glenn Phillips was the star with the bat for New Zealand in the second T20 against Bangladesh. Credit:Photosport

However, just nine balls into the tourists’ response, the match was stopped by officials because of an error in the DLS calculation. Play was stopped for more than five minutes and the target was eventually broadcast as 170. Soon after, that figure was changed again to 171.

“I think there was a bit of confusion because we didn’t know what the DLS score was, it kept changing on the scoreboard. It can happen in the game,” Bangladesh captain Mahmudullah said.