Cricket Australia has appointed Nick Hockley as its new CEO almost a year after he was rushed into the position as an interim replacement.

Hockley as given the role of acting CEO midway through last year after Kevin Roberts was blamed by the Cricket Australia board for its poor response to the COVID-19 pandemic. 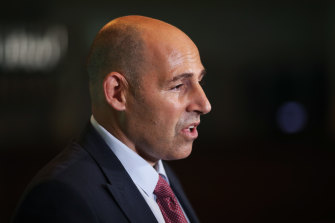 Nick Hockley has been appointed full-time CEO of Cricket Australia.Credit:Getty

The Englishman has a strong pedgree in sports administration, including the 2012 Olympics in England and 2015 Cricket World Cup in Australia and New Zealand.

Most recently he headed the International Cricket Council’s Twenty20 World Cup in Australia.

The Women’s T20 World Cup in March 2020 was a triumph, with more than 86,000 watching Australia beat India in the final at the MCG.

However, the men’s event scheduled for October was postponed until next year because of the pandemic.

The former London financier was favourite to take the position after a strong performance last summer ensuring the India tour went ahead and the BBL and WBBL were played in full despite the ever-changing restrictions across Australia’s states and territories.