Amid media commentary that the group of around 40 Australian players, coaches, staff and commentators – exiled from the Indian Premier League – had been given preferential treatment after arriving back from the Maldives on Monday, Hockley looked to douse the controversy, confirming that the Board of Control for Cricket in India had funded the return operation.

“Yes,” Hockley answered when asked by The Age and the Sydney Morning Herald whether the BCCI was paying for the quarantine.

“BCCI at the outset committed to ensuring that they got home safely and as quickly as possible. We’ve been working closely with them. They’ve been fantastic. They’ve delivered on that promise.

“Obviously our thoughts are with all of our friends in India. Then we’ve been working with government, within the existing frameworks to make sure that they get home as quickly as possible. I know the players, having texted a few of them, are extremely appreciative of the BCCI and we’re really pleased that they’re home safely. 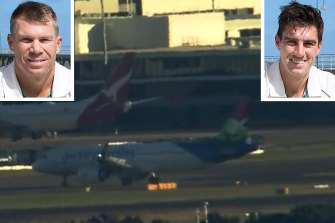 The plane arriving in Sydney and, inset, David Warner and Pat Cummins.Credit:Nine/SMH

“The BCCI are fulfilling on their commitments. They’ve made good on their promise and we’re extremely appreciative.”

The NSW Government confirmed on Monday that it lifted its cap of 3000 returned travellers to allow for the cricketers’ return.

Meanwhile, Hockley said CA was having productive talks about the rescheduling of February’s postponed men’s Test tour of South Africa.

“We are in regular contact with Cricket South Africa. We’re working with them to reschedule that tour. We are very imminently going to be announcing the schedule for this [home] summer. It’s been a fluid situation in terms of international tours more broadly,” Hockley said on Tuesday.

Hockley also said he was “really optimistic” the upcoming tours to the West Indies and Bangladesh would proceed, hopeful that players would be vaccinated for COVID-19 ahead of their departures. He added that the fact Marnus Labuschagne would remain in the United Kingdom rather than travel to the Caribbean typified the challenges of the current landscape.

“I know that the selectors and coaches and our national teams are looking at the broader landscape and all the cricket we’ve got coming up, including the Ashes this summer. I think what it demonstrates is that there just has to be a level of flexibility in terms of scheduling cricket in a pandemic.”