Danni Wyatt’s unbeaten 63 on her 200th England appearance helped secure a 13-run win over New Zealand on the DLS method to go 2-0 up in their one-day international series.

The 30-year-old’s second ODI half-century was the key innings as England gave away a flurry of cheap wickets in Worcester with a record 10th-wicket stand for England in one-dayers between Wyatt and Tash Farrant getting the hosts up to a total of 197 all out.

Openers Lauren Down and Suzie Bates got the White Ferns’ chase of 198 off to a strong start, reaching 40 before Kate Cross removed Bates for 28 as her powerful drive found Wyatt in the covers.

Sophie Ecclestone’s introduction did the trick as Maddy Green went for nine before Down was trapped lbw by Cross for 22 – although she would have been spared had she opted to review the decision.

Cross claimed her third wicket as Amy Satterthwaite went for just one and England had the visitors under pressure at 85 for four.

Rain delayed play with New Zealand 111 for four and their was target adjusted to 183 – increasing their required run-rate with 72 needed from 18 overs.

Nat Sciver struck in third over after the resumption with the big wicket of New Zealand captain Sophie Devine, bowled for 28, and England were in full control when Dean bowled Katey Martin for six to claim her second international wicket.

The tourists were reeling at 121 for six and Dean struck again to trap Hannah Rowe for seven. New Zealand’s hopes rested with Brooke Halliday, whose 29 gave them hope of chasing down their target before she became Dean’s third wicket to all-but extinguish the tourists’ chances at 155 for eight.

Dean removed Leigh Kasparek before Farrant dismissed Lea Tahuhu as New Zealand were bowled out for 169.

Earlier, having won the toss and elected to field New Zealand got off to an ideal start by removing the dangerous Tammy Beaumont for just 12. 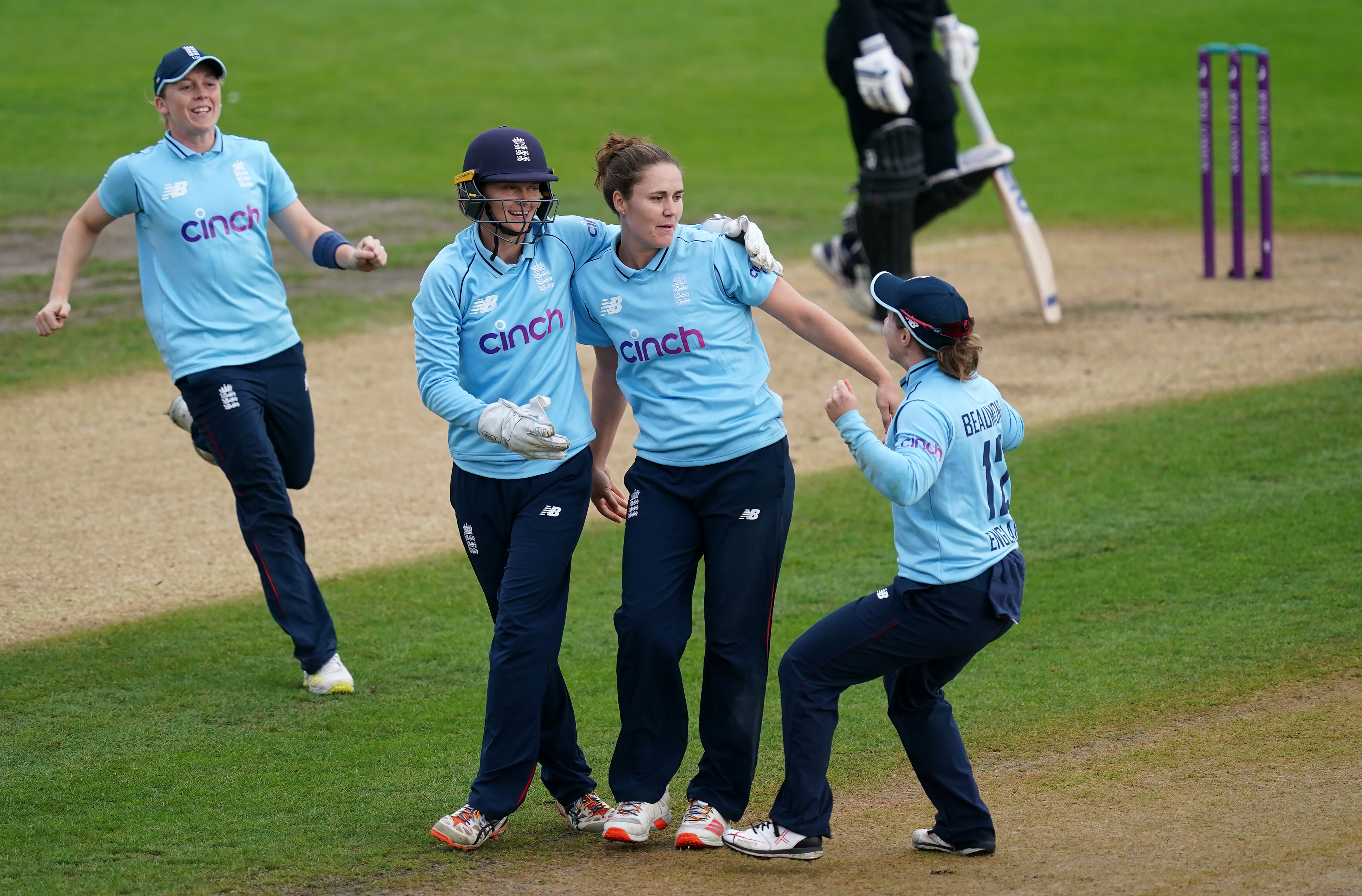 Devine made the key breakthrough as Beaumont left alone a ball which nipped back and clipped the top of off stump to leave England 14 for one.

The hosts lost wickets at regular intervals as captain Heather Knight edged behind for 18 before Sciver fell for one, caught driving in the air through the off side.

When Amy Jones also departed softly with just one to her name, England were 68 for four and in need of a partnership.

Opener Lauren Winfield-Hill was still battling away as wickets fell at the other end and Sophia Dunkley was the latest to come and go as she flicked Tahuhu straight to short mid-wicket. 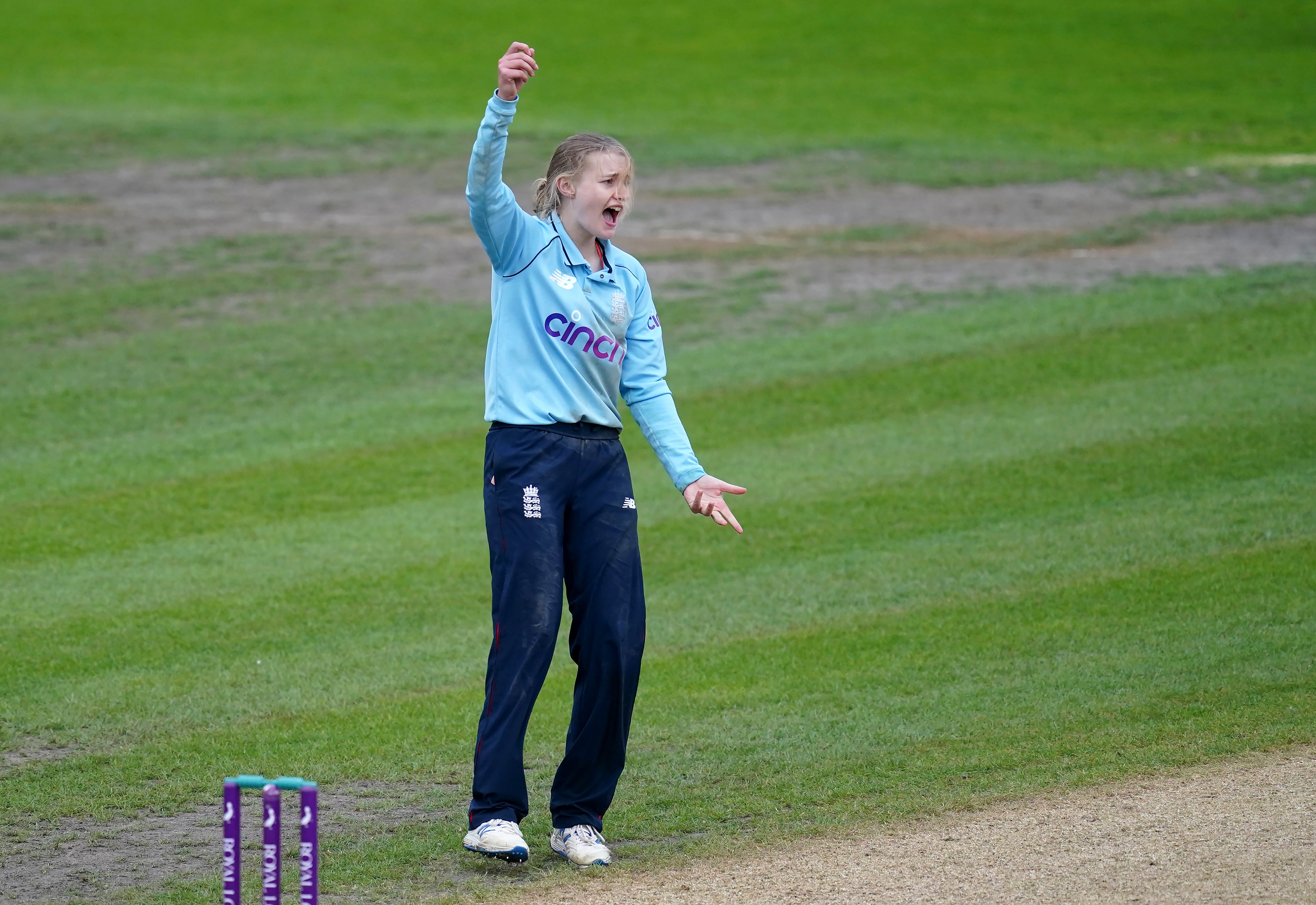 That wicket brought Wyatt to the crease but a ​33-run stand ended with a mix-up as the pair ended up at the same end and Winfield-Hill was run out by Kasparek as another clatter of wickets came.

Dean, Ecclestone and Cross all fell for single figures but a crucial half-century partnership between Wyatt and Farrant for the last wicket gave England hope.

Farrant hit three fours in her 22 and helped Wyatt bring up her 50 from 60 balls before the number 11 became the third wicket for Kasparek as England were bowled out with 6.3 overs of their innings still remaining.