Against a Melbourne Stars side decimated by COVID-19, World Cup winner Aaron Finch showed his experience in taking his Melbourne Renegades to a much-needed win at the MCG.

The win should take the Renegades off the bottom of the ladder as Finch made 50 runs off 40 balls in a five-wicket victory (5-129), securing a boost point in the process. 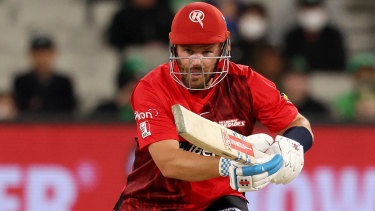 Eyes on the prize: Aaron Finch compiled a telling knock against the Stars.Credit:Getty Images

The Stars were missing 11 players due to COVID-19 and only made 126, which was never going to be enough.

Finch and Shaun Marsh added 63 for the second wicket to have their side in a winning position, although Finch will be disappointed he didn’t dispatch Tom O’Connell’s (2-11) waist-high full-toss for six with Haris Rauf catching him on the rope.

Rauf then clean bowled Mohammad Nabi for a first-ball duck leaving the Renegades at 5-91 after losing 3-4.

The Renegades activated their x-factor player early in the match with batsman James Seymour replacing Will Sutherland, and it proved a wise move as Seymour (17 not out) teamed with Mackenzie Harvey (19 not out) to score the remaining runs.

Stars replacement wicket-keeper Patrick Rowe gave himself a stumping on debut with the 20-year-old from Premier Cricket club St Kilda bobbling the ball from spinner Qais Ahmad but gathering it in time to stump Sam Harper.

The Stars’ batting line-up has been severely hurt by their forced outs and batting first they were soon in trouble with Renegades skipper Nic Maddinson taking three quick wickets with his left-arm spin and Glenn Maxwell’s side falling to 3-54 when Travis Dean was bowled for 32 off 26.

Hilton Cartwright made 41 off 29 to get the Stars into three figures before they were bowled out for 126 with the final ball with Maddison taking 3-20 and Kane Richardson 3-24.

The Renegades play Brisbane in Geelong on Thursday and the Stars play Adelaide in Adelaide on Friday.

The Stars lost two more players to COVID-19 in the lead-up to the match with import Joe Clarke getting back a positive PCR test on game day and Ringwood Cricket Club replacement player Tom Rogers returning a positive rapid antigen test which ruled him out.

Rogers impressed on debut on Sunday making 32 runs while opening the batting with Clarke.

The Renegades were without star fast bowler James Pattinson who was reportedly tested on December 30 after being a close contact of a positive case and was still waiting for his result.

BBL sides were aware the players could be called up this season.

Topley opened the bowling for the Renegades and the club is yet to say if he will play in Thursday’s game against the Brisbane Heat in Geelong before leaving for England.