Steve Smith has delivered another Big Bash League masterclass, smashing 66 from 33 balls as the Sydney Sixers left the Hobart Hurricanes finals chances hanging by a thread.

The Sixers, who had already locked in second spot and a place in ‘the qualifier’ on Saturday against first-placed Perth, defended 7-180 in a 24-run win on Monday night.

The Blundstone Arena clash wasn’t without controversy, however, when Sixers batter Faheem Ashraf was granted a life after initially being given out first ball to a Jackson Bird catch.

In scenes reminiscent of the Sydney Test earlier this month, the on-field ‘soft signal’ indicated umpires believed Faheem was out after Bird made tough work of a thick outside edge that floated towards the covers.

After a number of replays, Faheem was given not out. He failed to make much of his second chance and was dismissed for 3 eight balls later.

Faheem Ashraf was given a life after Jackson Bird claimed this catch.Credit:Seven

“That’s out every day of the week. They were trying to find excuses to give that not out. That’s landed on the top of his right hand, bounced up into his left.

“We’ve seen that a couple of times this summer.”

Former Test spearhead Brett Lee added: “The more you look at that, you’re trying to find a reason to probably not give it out. But I believe the fingers were underneath the ball and that should be out.”

The controversy followed Smith, coming off back-to-back tons, posting the fastest half-century of his Twenty20 career.

‘It’s obviously a different role, being up the top. But it’s a place I think that suits me.’

Smith reached 50 from just 22 balls and cleared the boundary six times in total to move to the top of the six leaderboard for the tournament despite playing just four matches.

“I’m feeling really good. It’s been good fun batting up the top, the freedom to just go out and play,” Smith said.

“Just having the ability up the top to go out and play how I want to play and set the team up … I’ve enjoyed it.

“It’s obviously a different role, being up the top. But it’s a place I think that suits me.” 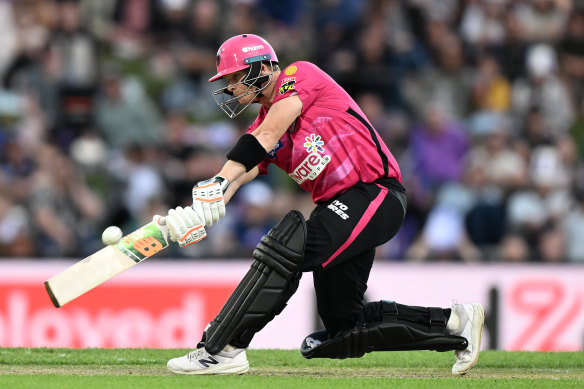 Steve Smith looked in superb touch before being removed by a full toss from Nathan Ellis.Credit:Getty

The Hurricanes remain in seventh spot on the ladder and must beat the Brisbane Heat on Wednesday and rely on other results going their way to make the top five.

Their chase never really got going, with Sixers’ quick Sean Abbott (2-32) becoming the first player to reach 150 BBL wickets when he removed Faheem late in the innings.

Earlier, Smith came out all guns blazing, hitting a six off the fourth ball he faced before launching one Tim David delivery on to the roof.

He appeared on track to become the first player to notch three consecutive BBL centuries, before falling lbw to a Nathan Ellis full toss in the ninth over.

Haddin called for national selectors to ensure Smith was in their best T20 side.

Smith played just one match for Australia in the most recent T20 World Cup on home soil, with the hosts failing to get past the group stage in their title defence.

“I don’t think you can not use someone in this sort of form. He’s only 33. He’s got another World Cup in him in the 20 over (format),” Haddin said.

Smith will play in week one of the BBL finals series, which begins on Friday, before heading to India for Australia’s Test tour.

He had a life on 25 when Caleb Jewell parried a difficult chance over the boundary.

The Sixers lost momentum, and a clump of wickets, after Smith’s departure before Ben Dwarshuis chipped in with an important 14-ball 30 late in the innings.

English import Zak Crawley top-scored for Hobart with 49 from 45 balls, while Tim David showed some glimpses with 24 from 13.