The Australian Board of Control cannot be credited with foresight, wisdom or justice in its surprise appointment of Richie Benaud over Neil Harvey as captain of the Australian side for the first Test in Brisbane, starting on December 5. Harvey is vice-captain. 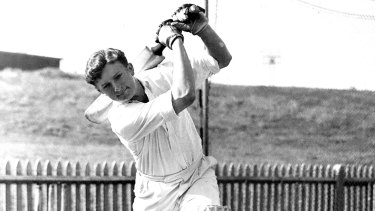 Richie Benaud pictured in the nets in 1952.Credit:SMH Archives

The appointment is likely to saddle a great player with a worry that could seriously affect his efficiency as a bowler and rob Harvey of the keenness to return to his former batting greatness.

The most flattering compliment that can be paid the Australian side is that on face value, it is not possible to guarantee a better team.

But, just the same, it is not a side to build up confidence that a sure step has been taken to win back the Ashes.

There may be some logical reason for Benaud’s ascendancy over Harvey, but it certainly defies sensible explanation on recent happenings.

Harvey was captain in the game just completed against the M.C.C., and no blame for the dismal showing of an Australian XI can be levelled at him.

It was no fault of his that the batsmen collapsed twice in the game, nor could he be held responsible for the weak efforts of the bowlers.

Originally, Harvey was not in the Australian XI side, but was called on at the last moment when Ian Craig dropped out.

But, previous to that match, Harvey’s claims to leadership have always rated ahead of Benaud.

Harvey acted as vice-captain to Ian Craig in South Africa and was his understudy in New Zealand.

Only logical conclusion is that Harvey has paid for going from Victoria to N.S.W.

It seems obvious that N.S.W. has supported Benaud, who was its captain in the first Shield match, while Craig was unavailable, and that the Victorian members of the Board of Control have got behind the move.

Benaud had a wonderful season in South Africa and developed into possibly the world’s best all-rounder.

But he would not have reached those heights had he been forced to worry about the other units of the side.

All he had to do was concentrate on his own play when bowling and, when asked to perform some special task with the bat – as in the fourth Test in Johannesburg – he did so in carefree style.

Now, it is different. He will have to make the moves and take criticism if things come unstuck.

Not the easiest decision Benaud will have to make will be when and how long to bowl.

Dow the ages bowlers who have captained sides in big cricket have continually erred, one way or the other, in bowling themselves too much or too little.

Fortunately, Benaud will be able to lean heavily on Harvey for advice and encouragement, as this appointment will have no bearing on their very close friendship.

Deciding to try to play safe and stick to players with some claim of proven ability, selectors cannot be blamed.

Harvey Had Better Claim Than Benaud

Richie Benaud’s appointment to the captaincy of the Australian team for the Brisbane test does not meet with my approval, not the approval of any of the experienced ex-internationals to whom I have spoken since the announcement.

There can be no doubting Benaud’s enthusiasm, nor his healthy appetite for knowledge of the game.

Also from the social angle as the now leader of future Australian teams overseas, Benaud’s qualifications cannot be questioned.

But I cannot see eye to eye with this decision of the Australian Board of Control.

To my mind, Neil Harvey has a more honest claim to the honor and I believe he would be a better field captain.

He had had years more experience than Benaud, his cricket brain is at least as equally as agile, and, I consider his outlook towards the game is tougher and more suited to Test competition.

As vice-captain of Australia, he has had one international tour during which he led the team on many occasions.

His off-the-field manner, which is pleasant, and his general social qualifications could not reasonably be held as the cause of his being superseded.

But, forgetting Harvey’s just claims to the captaincy, I believe that the board has taken an unjustifiable risk in appointing a captain who seems to carry the brunt of Australia’s bowling.

Benaud, this season, will not only supply the spin, but, because of his accuracy, must also take the role of a stock bowler.

His task at the bowling creases will occupy his energy, both mental and physical.

Surely he could be handled better by a player who has ample time to survey the overall picture of the game.