Home » Сricket » From the Archives, 1981: Bradman the greatest meets the best of the rest

Bradman the greatest meets the best of the rest

It was a moment to savour. There they were, Sir Donald Bradman and Vivian Richards. Together.

Probably the most accomplished batsmen in cricket history, Sir Donald and Richards were to be photographed together for the first time. 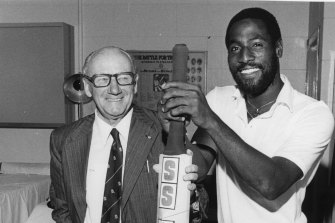 They were most comfortable in each other’s company. Understandably, the talk was of cricket. Nothing specific or contentious, simply matters of mutual interest.

“Is that right that we’ve never been photographed together?” asked Sir Donald, as he negotiated the cluttered West Indies dressing room at Adelaide Oval to reach Richards.

“Then we should share the royalties,” Sir Donald replied.

Sir Donald, 73, in a grey pin-striped suit, had come from the comfortable leather chairs in the executive viewing area. Richards, 29, in whites and jewellery, had emerged from the nets.

Richards thrills to stories of Sir Donald’s prowess, but has read little of his extraordinary achievements. He reads little other than boxing magazines.

Sir Donald is an admirer of Richards and regrets he has not seen more of his explosive batting. “I haven’t seen much of Vivian at all. But what I have seen, he is a very fine and very exciting player,” said Sir Donald.

“He is particularly strong on the onside. In fact, he is as strong as any – if not the strongest – on-side player I’ve ever seen.”

“I haven’t seen one of these at close quarters,” he said, handling it carefully and assessing its weight and texture. “We didn’t have them in my day, Vivian.”

Sir Donald could not resist the urge, and slipped the helmet on his head, dislodging his spectacles.

Big, grim fast bowler, Colin Croft, anxious to have a personal record of such an off-beat moment, delved into his cricket bag and photographed Sir Donald wearing the helmet.

“What are they like to wear, Vivian?” said Sir Donald.

One sensed that Sir Donald approved of that.

Both men said they looked forward to receiving a copy of the photograph. So, too, will the game’s historians.