Cricket Australia granted special dispensation for Cameron Green’s nearest and dearest so they could celebrate a landmark moment in the career of one of the most exciting young players the country has produced for many years.

Players and partners are not due to enter the biosecure bubble until the camp arrive in Melbourne but Green’s partner Emily Redwood and his father Gary Green were invited by the team onto the Adelaide Oval to be part of the gun youngster’s baggy green presentation ceremony. 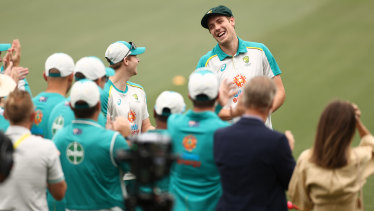 “Us 10 players who walk out with you today are bloody excited to be out there with you,” Cummins said. “Just make sure you enjoy it, whether you get a duck, 0/100, spend a day in the dirt. Any day you get to pull this on your head is a bloody great day.”

The friendly handshake has been frowned upon during the pandemic, but not so among the well heeled of the South Australian Cricket Association, it seems.

Players are encouraged to bump fists, and the elbow shake has also become a thing, but front and centre in the SACA’s Member Etiquette Guide is a graphic of two people shaking hands. 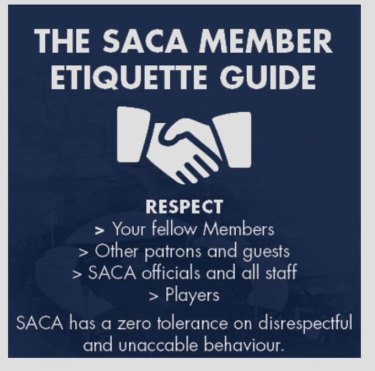 South Australian government advice is not to shake hands, not so for SACA Members at Adelaide Oval.

It flies in the face of official government advice in South Australia on physical distancing, which urges people to “swap handshakes for a wave”.

Perhaps it’s an oversight from the SACA, who have had a bit on their plate in the past month after an outbreak of COVID-19 in Adelaide threw planning for the Test into chaos.

Will Paine get a game for ’Canes?

The Hobart Hurricanes last month landed what it described as a “coup” by signing up Tim Paine for this season – though whether he actually plays remains to be seen.

As keen as Paine is to return to the Big Bash League, he may well be exhausted after a what is expected to be a taxing Test series. But even if he is mentally and physically willing, where will the Hurricanes fit him in?

Paine appears best suited to bat at the top of the order but in Matthew Wade and D’Arcy Short the Hurricanes have the national T20 opener and another batsman earmarked for a similar role for Australia.

Hobart also have Wade, Peter Handscomb, Ben McDermott and Jake Doran as options behind the stumps. And though Paine is regarded by national selectors as the best gloveman in the country, T20 has evolved to the point where players must be strong in two disciplines to command a game.

There is a view in some quarters Paine’s recruitment was driven by head office in Tasmania but a source familiar with the matter has told the Tonk the Test captain was as good an option as any to fill the last spot on the club’s list.

Our loyal readers will be aware the biosecurity protocols in place in the Big Bash League hubs have been a source of consternation among players and coaches wondering how they will fill their considerable spare time.

Not surprisingly, the hotel bar is getting a decent run, especially with stumps being drawn at 2am. The Tonk is hearing the bar in the Hobart bubble has become a meeting point for the BBL fraternity eager to chew the fat or debrief after games into the early hours of the morning.

Cordoned off from the general public, players can avoid the drama that Chris Lynn found himself in last weekend at a pub in Canberra, which resulted in him, teammate Dan Lawrence and the Brisbane Heat being fined $70,000. It certainly makes for a cheaper night.