Travis Head and Marcus Harris started the series with question marks over their places in the Australia XI. One man is now ensconced in Australia’s middle order but the other’s place in the team hangs by a thread heading to the Boxing Day Test.

Harris squandered a gilt-edged opportunity to lock himself in for his home Test, one of three wickets to fall in a dramatic first hour that gave England a skerrick of hope of avoiding a near impossible run chase.

But junk-time half-centuries to Head and Marnus Labuschagne soon had the visitors back on their knees, a position they have become accustomed to across the first eight days of this series. 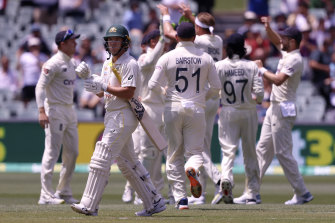 Marcus Harris walks off after being caught. Credit:AP

It will take a dramatic form reversal by England’s bedraggled batters to prevent the Australians from completing a big win and taking a 2-0 lead to the MCG. Late in the second session on day four, England were 1-4 chasing 468.

Unlike England, Harris’s fate is completely out of his hands after failing to cash in on the hard work he had done the previous evening when he negotiated 17 overs against a new pink ball under lights.

In a game where run machine Labuschagne was granted four lives, Harris can be forgiven for wondering why the cricket gods are not smiling upon him.

In both innings he was spectacularly caught by Jos Buttler, whose two blinders to remove the opener have come amidst a sea of blunders behind the stumps. The wicketkeeper’s diving one-gloved snare meant the opener could do nothing but watch on as teammates whose places in the side are not in question helped themselves to the buffet bowling later in the afternoon.

The third innings of a Test match when a side is aiming to double a 200-plus lead can lack intensity. This was no exception.

If confirmation did not come when fast bowler Ollie Robinson, channelling the spirit of Colin ‘Funky’ Miller, abandoned his seam-uppers to bowl three overs of off-spin, it came later when part-time spinners Joe Root and Dawid Malan operated in tandem.

Harris has at least two allies on the three-person selection panel in coach Justin Langer and selection chair George Bailey.

Bailey indicated before the series Harris would be given an extended run to prove himself at the top of the order, though it’s arguable he has already had plenty of opportunities to show his value.

Harris’s dismissal for 23 was the 16th innings in a row he has failed to reach 50. Of the 134 openers who have batted 10 times against England, none average lower than Harris’s 10.66, according to data analysts CricViz.

Twelve Tests, an average of 22 and only two half-centuries from 23 innings provide further proof for the doubters that he is not up to the mark.

In Harris’s favour, he has been the best performed opener in the Shield for several seasons and with Australia in such a strong position to retain the urn selectors may be more inclined to give him one more go.

Conversely, Australia’s domination of England is also the perfect time to blood a next-generation opener in Bryce Street or Henry Hunt, who average 40.9 and 38.5 respectively.

Another option is to reunite David Warner with Usman Khawaja, who were first teammates as primary school kids, though it would leave Australia with two veterans at the top who are well into the twilight of their careers.

The match situation allowed Cameron Green, coming off zero and two, to spend some much-needed time in the middle under relatively little pressure.

The all-rounder, whose seam bowling has been integral to Australia’s success this summer, made an unbeaten 33 while his partners took the risks pursuing quick runs.

Head, the player of the match in Brisbane, smacked a near run-a-ball 51 and Labuschagne passed 50 for the third time this series.

There was a scare late in Australia’s innings when Mitchell Starc reached for his left ribcage in discomfort after attempting a wild slog. The left-arm speedster completed his innings and later took the new ball.