Australia’s convincing victory over England has been soured by an injury to Josh Hazlewood that is likely to sideline the star paceman from the second Test and break up the side’s rampaging attack.

West Australian speedster Jhye Richardson is in the box seat to make his Ashes debut in Adelaide, while perennial squad member Michael Neser is also in the frame, as Australia contemplate a cautious approach in managing one of their most prized assets.

Scans have cleared Hazlewood of serious injury to his side, considered the fast bowler’s grunt muscle, but the combination of a short turnaround and the quality of the quicks sitting on the bench points to the dependable seamer sitting out of the pink-ball Test starting Thursday.

Australia completed an emphatic nine-wicket trouncing of Joe Root’s men shortly after lunch on Saturday after a clinical display with the ball in the first session resulted in England collapsing to lose 8-77.

The calmness Australia showed under pressure, in contrast to key moments last summer against India, was a feature of the victory, while there was also a glimpse as to how the unorthodox leadership pairing of Pat Cummins and Steve Smith can defy long-held views on the Test captaincy.

The Australian camp had said Hazlewood was not injured after he was restricted to just eight overs on Friday when Root and Dawid Malan led England’s revival but conceded after the game the giant quick had suffered a “very mild” side strain. 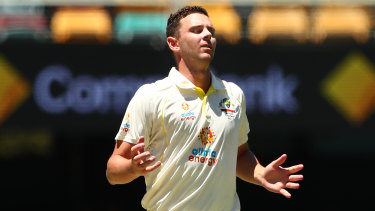 Josh Hazlewood suffered a mild side strain during the win at the Gabba.Credit:Getty

That Hazlewood sent down a six-over spell with the second new ball is testament to that grading, though Cummins’ comments post-match suggest Australia will not be taking any risks.

Hazlewood had not played a first-class game since April before the Test, his preparation for the Ashes dominated by Twenty20 cricket, first in the Indian Premier League then in Australia’s successful World Cup campaign.

“I think we’ll wait until he wakes up in the morning. I think a key is we don’t want to put him in jeopardy for the whole series,” Cummins said. “We’ll take our time. He had a scan last night so we’ll kind of work through that.

“There’s nothing scary enough [in the scan results] to not bowl today but still a little bit just to make us want to manage him a little bit.

The 178 cm Richardson lacks the height to trouble England’s batters with bounce in the same way as Hazlewood but, as noted by selection chair George Bailey, is capable of bowling defensive spells when required and, armed with a fast out-swinger, also has the weapons to strike with the new ball.

Richardson, the form bowler of the Sheffield Shield, is also effective with the pink ball, having taken 5-45 on debut under lights.

The uncapped Neser would appear to be the fifth quick in line but selectors respect his prowess on lush tracks such as those produced in Adelaide for day/night matches, having picked him for the 2019 Ashes tour.

After a dream first day in charge for Cummins, the challenges of the job were laid bare during Malan and Root’s 162-run stand. The rookie captain kept his cool and stuck to his plans, earning a tick from former skipper Mark Taylor, and was rewarded with a surge from his team on the fourth morning.

Indicative of the role Smith will play in the leadership, Cummins said the idea to bring himself into the attack to bowl at Ben Stokes was that of his vice-captain. Cameron Green pointed to Smith in acknowledgment after taking the catch to dismiss Stokes off Cummins’ bowling.

“I will say I was going to bowl Starcy one more but Smithy tapped me on the shoulder and said, ‘I think it’s your turn’,” Cummins said. “So I went up to him and gave him a big high five, he was a big part of that wicket.”