Australia does not have a recognised opening partner for David Warner while one-time captaincy contender Travis Head has taken a hit, as Cricket Australia confirmed its 2020-21 contracts list.

CA released a list of 17 players – the minimum number required – with national contracts on Friday, and Will Pucovski, Matthew Wade and Head were among the notable exclusions. 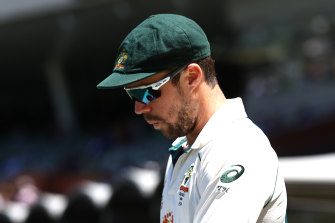 “There is a considerable amount of international cricket to be played across all formats in the next 12 months and the door to national selection is never closed to players outside this list,” Hohns said.

“The NSP [national selection panel] continues to hold Joe Burns, Travis Head, Matthew Wade, Mitchell Marsh and Marcus Stoinis in high regard and expect that they, and many others across Australian cricket, will continue to make strong cases for national selection next season.”

Pucovski made a half-century on Test debut against India at the SCG but also hurt his shoulder and missed the final Test in Brisbane.

He has since had surgery and faces an extended time on the sidelines. Wade’s international future is largely now seen in the Twenty20 side but he has intentions to force his way back into the Test side.

West Australian all-rounder Cameron Green secured his first full contract, having played all four Tests against India, while finishing as the leading run scorer (922 runs at 76.83) in the Sheffield Shield, including three centuries.

“Cameron is a player we believe will play an important role for Australian cricket after his impressive breakout summer,” Hohns said.

Alex Carey secured a contract and is in line to succeed Test skipper behind the stumps while fast bowler Pat Cummins remains the No.1-ranked player.

“Competition for spots has always been a hallmark of strong Australian cricket teams and we are happy with the depth across all our disciplines entering next season. In the fast bowling ranks, Jhye Richardson is a player we believe has a big future across multiple formats and his return to the game has been strong,” Hohns said.

“We are equally impressed with and optimistic about the form of fellow quicks James Pattinson and Kane Richardson. Nathan Lyon took on a huge workload in red ball cricket this summer and bowled impressively throughout, while Alex Carey has been excellent with both bat and gloves for Australia in white-ball cricket.

“We are also fortunate to have two outstanding captains in Tim Paine and Aaron Finch, and we look forward to them once again leading their respective teams with pride over the next 12 months.

“In these next 12 months, Australian men’s teams will compete for some of the biggest trophies on offer. The T20I World Cup is the one ICC trophy to elude Australia thus far and we are confident of a good showing in India.“