Pat Cummins’ response to being asked the best perk of becoming Australia’s Test captain should make No.11s the world over very nervous. “I can bowl myself at the tail now, which is very nice,” he says.

England’s rearguard in Sydney may have turned out differently if Cummins had bowled two of the last three overs rather than Steve Smith, but he was told by the umpires that if he did, they would have to take the players off for bad light.

Failing to close out victory in the fourth Test at the SCG – with the captain criticised in some quarters for the timing of his second-innings declaration on the fourth evening – has been the only bump in the road for Cummins since he took over from Tim Paine in late November.

So far, this series has been played in exceptionally good spirits. At Sydney, England players warmly applauded Usman Khawaja’s hundreds, Australians likewise for Jonny Bairstow. Nathan Lyon was seen giving Joe Root tips on bowling off-spin, Mitchell Starc was laughing and joking with the England captain after hitting him with a low blow the day before during the Adelaide Test, while Justin Langer will opine loudly about his admiration for Ben Stokes. Even James Anderson has managed to be friendly to the locals.

It is so different from recent tours. Four years ago Lyon wanted to “end careers” and reignited a feud with Matt Prior, who was not even in Australia, saying he had been “scared” and wanted to go home in the previous Ashes series. In 2013-14, Michael Clarke told Anderson to get ready for a “broken f—ing arm” and David Warner spoke about the “scared eyes” of Jonathan Trott as he suffered his mental breakdown in the middle at the Gabba. 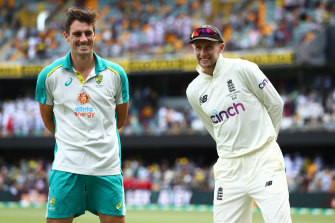 There has been none of that this time. Cummins has laid down the law. Australia do not sledge, deeming it a waste of energy better used trying to bowl batters out. The Australian public were also weary of boorish cricket teams, especially after Cape Town and the sandpaper scandal in 2018.

Cummins even speaks warmly about an England captain being one of his big influences.

“I look at different leaders and someone like Eoin Morgan,” he says. “I like his outlook on captaincy and how he brings the team together. I have worked with Eoin in the IPL [Indian Premier League] for the last couple of years and we have very similar outlooks on life.”

Australia have been so far ahead in this series they have pitied England rather than feeling the need to sledge them. Perhaps it is because Cummins is the No.1 bowler in the world. He can intimidate in other, more effective, ways.

‘[The players] do not have to try to impress anyone or sledge just because it might have been done like that in the past. Just be themselves.’

“You have to be aware of it. From a couple of years ago it was obvious the world wanted all cricket teams, particularly the Aussie cricket team, to tone it down a little bit,” Cummins says. “I keep encouraging all of our players to be themselves. They do not have to try to impress anyone or sledge just because it might have been done like that in the past. Just be themselves.

“No doubt, the first Tests have been pretty smooth sailing and it [sledging] is something to keep an eye on. But I’ve been really proud of how the lads have conducted themselves so far.

“You lead by your actions in this space. If I need to pull someone up [for sledging] I will, but everyone is an adult here. They have heard it loud and clear from the outside what is expected of us and from cricket fans in Australia. I will not be taking all the credit, the boys have been fantastic themselves.”

Tactically, Cummins has not been stretched too much, but he has clearly created a welcoming environment, given all of the new players have contributed straight away, from Scott Boland’s 14 wickets at an average of 8.64, to Khawaja’s twin hundreds. Jhye Richardson took a five-for in his only Test.

Cummins has not only won the Ashes handsomely in his first series, but Australia seem to be building a squad of players to take to England in 2023, where he will aim to become the first captain to win the Ashes overseas since 2001.

“We retained the Ashes in 2019, but I left there feeling we had unfinished business,” he says. “It is a huge series for this group to work towards. Winning overseas is massive. Our next tour is to Pakistan and the best teams win there. That is the next challenge.

“There is always a lot to play for in Test cricket. We play a maximum of 10 games a year and each game is a huge event, every series is big. We love it.

“For just about every cricketer growing up in Australia, it is their preferred format. Test cricket means something in Australia. It is where history is made. Ashes series 12 months out, you bump into people in the street and they are already saying they can’t wait for the Ashes. It brings everyone together and gives us the chance to stamp our own legacy on the game.” 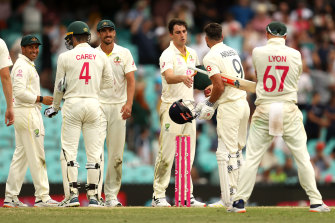 England have not been captained by a fast bowler since Bob Willis. Jason Holder and Courtney Walsh led West Indies, Kapil Dev India and both Wasim Akram and Waqar Younis followed Imran Khan to the captaincy of Pakistan in the 1990s, but they are a very rare breed.

Knowing when to bowl himself or come off has not been a problem for Cummins in his three matches so far – he missed Adelaide due to being a COVID-19 close contact – and it has been smooth in the field. His one big mistake was that declaration in Sydney – although he insists giving himself more runs to play with enabled him to attack with impunity on that final day.

“It has been smooth sailing so far, but I know it is not going to be like that forever,” he says. “When the team goes well you really relish it, especially seeing a lot of the other players grow. Cam Green has grown, Trav Head, even Mitchell Starc, a seasoned pro like him. I just love being at the top of his mark talking it through and seeing him in action. I’ve really enjoyed it so far.

“I’ve always thought bowlers can be captains. I’m not sure if it is the start of a trend, but why not? My experience of being a bowler is really valuable when I’m in the field talking to other bowlers, trying to make bowling changes and setting fields. I feel like I can draw on my own experiences a lot. There is no reason why there can’t be more bowling captains going forward.

“As a captain, your main skill, either batting or bowling, has to be in order first. Captaincy is second to that. If I feel I am overthinking captaincy in the middle of my bowling, that is when I will look for help elsewhere because I really want to protect that space. Maybe during our batting innings, I have the chance to unwind in the dressing room and switch off, but the bowling gives me a lot to think about, so that takes my mind off captaincy a bit anyway.”

The No.11s have been warned.