Home » Сricket » ‘I wish we had one more day, one more phone call’: Symonds’ impact measured by tributes

A heartfelt letter left by Andrew Symonds’ sister at the scene of his fatal car crash illustrates the enormous impact he had on those who watched him on the cricket field, or shared their lives with him as family and friends.

“I wish we had one more day, one more phone call,” Symonds’ sister Louise said.

“My heart is broken, I will always love you, my brother.”

Queensland Cricket and the Bulls Masters’ former players body are currently in discussion with Symonds’ family about how best to remember him after he was killed in the crash outside Townsville, aged just 46. 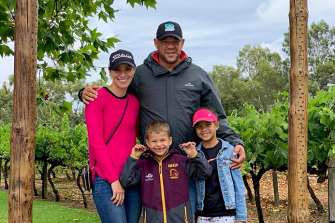 Andrew Symonds with his wife Laura, son Will, and daughter Chloe

Most likely, for a private man, is a private funeral that will be available to the general public via video stream, as was the case with Rod Marsh.

Jimmy Maher, Symonds’ former state and national teammate and managing director of the Bulls Masters, is leading discussions between the family and the cricket hierarchy, only a matter of weeks after he was also present in Queensland when Marsh suffered an ultimately fatal heart attack.

Whatever the format, Symonds is already the subject of many heartfelt expressions of grief and appreciation, including the personal note left by his sister at the crash site.

In north Queensland, where Symonds spent so much of his time hunting and fishing, both during and after his professional cricket career, some have chosen to put out their fishing rods in a gesture of visual remembrance.

The “Rods out for Roy” idea emanated from the North Queensland Cricket Association. Early in his cricketing life, Symonds would habitually commute from Charters Towers to Townsville – a three-hour drive – to train and play for the Wanderers Cricket Club.

“In our environment he was the great bulls*** barometer,” Symonds’ former teammate Justin Langer told SEN Radio. “In the Australian team there’d be some big egos or some things, and he’d pull you straight into line. It wouldn’t be with great speeches or anything, he’d just look at you, or say ‘enough of that son’.