Home » Сricket » Immaculate deception: Cummins highlights why it has been a blessed summer for bowlers

Pat Cummins removing Zak Crawley during the fifth and final Ashes Test was another celebration of this marvellously rebalanced summer.

Another immaculate delivery from Perfect Pat jagged back into the tall right hander and took an inside edge to Travis Head at short leg. 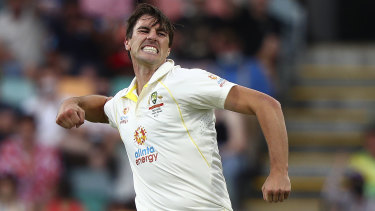 On the highlights reel it looks no different to so many other England dismissals as the ball darted off the seam and caught an edge on the way to a close catcher, giving Australia another early breakthrough on the second afternoon of the day-night Test in Hobart.

But in a game usually dominated by batsmen from the boardroom to the selection table and playing field, it was another win for the bowler on a lush, green pitch.

All five pitches this summer appear to have been made in the image of La Nina, which continues to cool and dampen much of Australia’s east coast.

The last La Nina which coincided with the Ashes in Australia, during 2010-11, saw England claim a rare series victory in conditions most suited to their bowlers.

And so things have been during moments in this series, most notably on the opening day of this Test when England captain Joe Root won the toss, bowled like he should have in Brisbane, and reduced Australia to 3-12.

The last time England went through an entire Ashes in Australia without scoring 300 was during 1958-58, when they were stitched up by two of Australia’s greatest players, the left arm swing of Alan Davidson and leg-spin of skipper Richie Benaud.

With a conscious effort to ensure there is more in the pitches for bowlers, particularly with the traditionally flatter surfaces of Melbourne and Sydney, the Tests have been tinged with a little extra tension, a feeling that something is always about to happen. 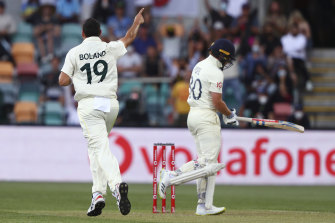 That tension rose to new heights during the fourth Test in Sydney on a gripping last day which rated in the millions. It produced that most unique of cricket results, the exciting draw, as England held on by their last wicket after the match lost 60 overs through rain, thanks to the ever-present hand of La Nina.

Lopsided or not, this series has increased the value of runs and heightened the achievement of substantial scores.

The dynamic, counter-attacking centuries Head made in the first and last Tests to bookend the series will go down in Ashes folklore as brave and brilliant, defying the conditions to change the game.

Usman Khawaja did the same in Sydney as a replacement for the Covid-confined Head, making a century in each innings to celebrate his first Test for two and a half years.

These well-tended pitches also created fairy tales from nowhere. The prelude was Jhye Richardson claiming five second innings wickets in Adelaide; stepping in for the injured Josh Hazlewood after a two-year rehabilitation himself.

But the main event has been Scott Boland, the 32-year-old Victorian journeyman and just the second man of indigenous heritage to play Test cricket for Australia.

Making his debut in front of his home crowd during the Boxing Day Test is fairytale enough for any Victorian. To take 6-7 in the second innings and be Player of the Match is dreamtime stuff.

Making an MCG pitch which prompted the feature Test of the summer to last little more than two days may have appeared a touch too extravagant, but the bowlers were owed the wickets and the rest after years of batathons.

Another sublime effort in Sydney and Boland walked into this Test with 14 wickets at an average of under nine after overcoming a rib complaint to present another immaculate performance.

But most of all the celebration around these sporting pitches is that they’re honouring a first in 144 years of Test Cricket, a fast bowler as permanent captain of the Australian team.

When Cummins trapped his captaincy counterpart Joe Root in front with another unplayable off-cutter to claim a third wicket, it was clear the cricketing gods were still smiling on Australia’s fast bowlers.