Australia have lost the third and final game of their T20 series to India by 6 wickets in Hyderabad.

Virat Kohli with a steady 63 of 48 balls and Suryakumar Yadav with a more lavish 69 off 36 provided the bulk of the home side’s runs as they chased down Australia’s total of 7-186 with one ball to spare.

The series hinged on the final match after Australia won the first T20 in Mohali by four wickets and India won the curtailed second game in Nagpur by six wickets.

Earlier, quickfire half-centuries from Cameron Green and Tim David set up a competitive score for Australia. 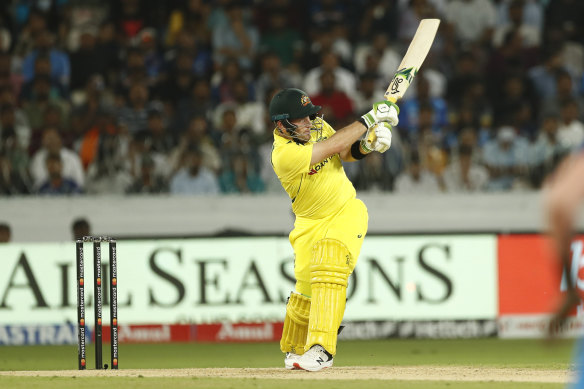 Josh Inglis in action on Sunday during the final match of Australia’s T20 series against India.Credit:Getty Images

Green (52 off 21 balls) dominated the early stages of the Australian innings, scoring all but 10 of their runs before he was dismissed off the final ball off the fifth over.

However, he was the only one of Australia’s top four to reach double figures, Aaron Finch (7), Glenn Maxwell (6) Steve Smith (9) all falling cheaply as the visitors slipped to 4-84 in the 10th over.

David (54 off 27) provided much-needed momentum in the later overs, combining with Daniel Sams (28 not out off 20) for a seventh-wicket stand of 68, after Australia slumped to 6-117.

They took 39 off the 18th and 19th overs with David, who made his Australia debut in the series opener, underlining his power hitting credentials with four sixes in his innings.

Maxwell was run out in unusual circumstances following a direct hit from the deep by Axar Patel.

While wicketkeeper Dinesh Karthik dislodged one bail with his glove before the ball hit the stumps, Maxwell was out of his ground when the second bail was dislodged by the ball.

India pulled back the run rate following Green’s dismissal as Australia scored just 24 in the next five overs.

Left arm spinner Axar Patel. (3-33) was again Australia’s nemesis, finishing the series with eight wickets at an average of 7.87 and economy rate of 6.30.

He struck twice in the 14th over, having Josh Inglis (24 off 22) caught at backward point and then taking a smart low return catch to dismiss in-form Matthew Wade for just a single.

Leg spinner Yuzvendra Chahal (1-22 off 4) also did good job of putting the brakes on Australia before David and Sams lifted the tempo.