Home » Сricket » ‘It was just magic’: From Boxing Day boos to World Cup glory for Marsh

Mitchell Marsh knelt like an overjoyed Wimbledon champion in the middle of the Dubai International Cricket Stadium and roared with uncontrolled emotion as he was mobbed by teammates.

Three years after being booed by the Boxing Day crowd during a Test for Australia, Marsh had just taken his country to its first men’s Twenty20 World Cup title against New Zealand on Monday morning (AEDT).

Having clubbed his first ball for six, Marsh charged to an unbeaten 77 from 50 balls as Australia romped past New Zealand’s competitive 4-172 to win by eight wickets with seven balls to spare.

Maligned at times for failing to bridge the gap between talent and performance, and viewed as having received preferential treatment earlier in his career, Marsh stamped himself as an all-Australian hero with a player of the match performance.

“I’m just super proud of this, this whole team,” Marsh, 31, said later at the team hotel. “Personally, to be able to stand up in the final like that and get us over the line, it was just magic. And as you can imagine, I’m just over the moon, so proud [of] this whole group for what we’ve just achieved.”

The former under-19 Australia captain, who has been in and around the national set-up for a decade, has been shaped by his experiences, good and bad. 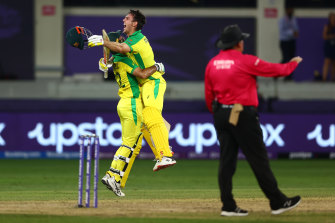 “I’m certainly very confident in my ability now,” he said. “It’s often spoken about, my journey and the ups and downs, and all those experiences just build resilience.

“And that sort of stuff has gotten to the point where I was able to go out tonight in a World Cup final and I leant on all those experiences – both amazing, playing cricket for Australia and WA, and the tougher experiences – but that’s no different to anyone else.

“Everyone’s got their own story. Everyone’s been through ups and downs. I think what stands out for me most is just the love in this team. I’m playing for my teammates. I’m not going out there to play for my spot, or show people or prove people wrong.

“I’m going out there to perform for my teammates, and hopefully everyone back home could see the enjoyment, the smiles we played with. Any time there was a contest, we’re up and about for it, and that’s what it takes to win World Cups, so it’s been bloody great.”

Marsh has been a revelation since moving up to the pivotal No.3 batting position for difficult white-ball tours of the West Indies and Bangladesh as part of a depleted Australian side. He made seven scores of 30 or more in the 10 T20s, including four half-centuries.

But it was his intent that proved central to driving Australia to glory in the second half of the T20 World Cup.

Despite being shuffled down the order in Australia’s second match, then inexplicably dropped for the team’s only loss, against England, Marsh finished as Australia’s second-highest run scorer with 185 at 62, and a strike rate of 147.

He credited Andrew McDonald with super-charging his game earlier this year when the assistant coach took Australia’s T20 side to New Zealand while senior coach Justin Langer was preparing for a South Africa tour that was ultimately postponed.

“There has been a change in mindset,” Marsh said. “I remember very clearly, we had a conversation on our tour in New Zealand … about you can change the game by getting on top of teams from ball one.

“All the best players in the world have the ability to do that, so I went away from that tour and worked with my batting coach extremely hard to change my game to be able to hit more sixes from ball one.

“Talking to Marcus Stoinis, he has been huge for me about having a presence. You see the presence that he has when he goes out into the middle, so I guess this is a mindset thing. It’s backing your ability against the other best players in the world and having fun.”