England’s greatest wicket-taker Jimmy Anderson is out of the first Ashes Test at the Gabba with a calf complaint – the same type of injury that ruined his 2019 campaign.

There had been some queries over whether Anderson would play the first Test in Brisbane, as it was never likely that at the age of 39 he would be asked to take part in all five matches of the series. 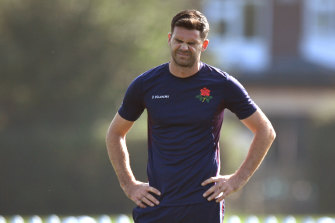 England fast bowler James Anderson is being saved for the second Ashes Test, under lights at Adelaide Oval.Credit:PA

A minor calf niggle means he will not be considered for the series opener, the better to ensure he is fit for the second game of the series under lights and with a pink ball at Adelaide Oval next week.

The fact that the final Test of the series has been moved out of Perth and will now be a second pink ball game in the eastern states – in Hobart, Melbourne or Sydney – will also have forced England to rethink how they use Anderson across the five matches.

Anderson claimed 5-43 with the pink ball under lights in Adelaide in 2017, when Australia were rolled for 138 in their second innings to set-up the closest finish of an otherwise lopsided series four years ago.

Without Anderson, England will be left to choose between Chris Woakes, Mark Wood, Ollie Robinson, Stuart Broad and Jack Leach for their four full-time bowlers, in addition to the all-round skills of Ben Stokes.

The best combination of speeds, heights and angles on the crease may well be that of Wood, Woakes, Robinson and Leach, also leaving Broad out of the Gabba.

The captain Joe Root had said that the collective balance of the bowling attack would be vital as England managed expectations around Stokes following an extended break from the game.

“There’ll be an element of managing expectations, and you’ve got to trust his experience and our whole bowling group that collectively we can work together to take those wickets,” Root said on Monday.

“I’m sure Ben will have a big say in that. We’ll be making sure we try to get that right in that whole series and especially this first game.”