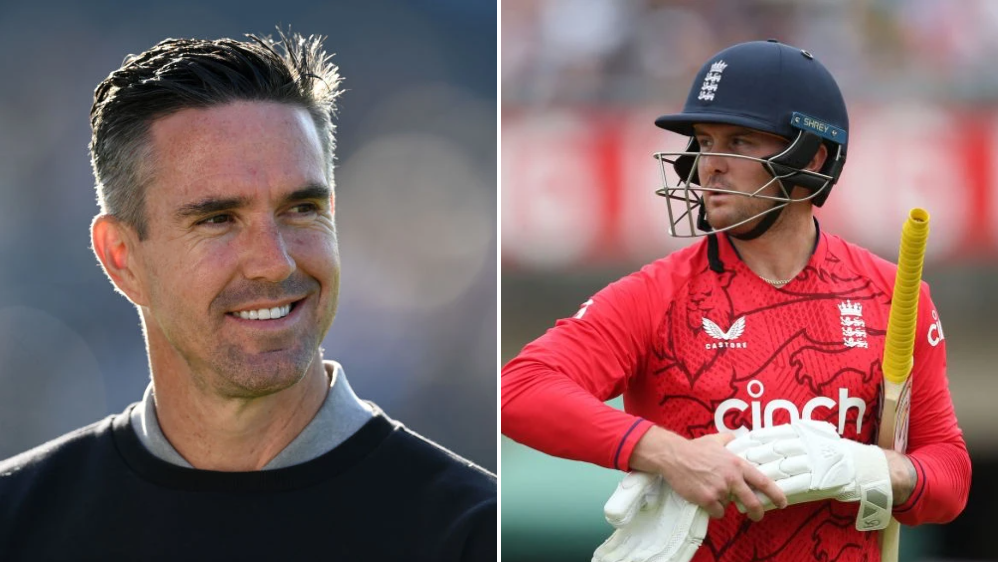 Kevin Pietersen has backed Jason Roy to rediscover his form and urged England not to drop the struggling opener, calling him the team’s ‘best player’.

The 32-year-old has also made a subdued start to The Hundred, scoring ten runs in two games and falling for a first-ball duck in Oval Invincibles’ opening fixture against London Spirit.

However, despite his lean run of form, Roy has received public support from England legend Pietersen, who says he should keep his place in the team for the T20 World Cup later in the year.

‘Jason is 32 and what I’m sick and tired of in this country is people getting written off at such a young age,’ Pietersen told Sky Sports.

‘Jason is a World Cup winner, he’s done an unbelievable job for Eoin Morgan [England’s former white-ball captain]. He was told by Eoin, like the whole team, to go and smack the ball.

‘With smacking the ball and being a risk-taker, you are going to fail and when you start failing, failing can happen for a long time.

‘If they replace him and put a new guy in for seven T20s in Pakistan and he fails, people start saying “we need Jason Roy for the World Cup”.

‘Leave Roy. Give him the opportunity through the Hundred and T20s and back him.

‘They’ve done it with Zak Crawley in the Test team – Ben Stokes has categorically said Zak Crawley will play for the rest of the season. England need to do that with Jason Roy in the T20 team.’

Speaking after the Invincibles beat Welsh Fire on Sunday, Billings told BBC Sport: ‘We have all watched and admired him all his career and seen what he can do to the best bowling attacks in the world.

‘It is funny. Everyone says go strike at 160, average 40 and take down the best bowler straight away and we take it for a given. Unfortunately this game is a game of peaks and troughs.

‘It is just a matter of time with a player like that. He is a match winner and can solely take a game away from anyone.’

Roy has been a dependable and destructive member of England’s white-ball team since 2015, scoring 29 fifties and ten hundreds in 171 matches.

But he struggled during England’s recent series defeats to India and South Africa, averaging 12.66 across the six games with a strike-rate of 77.55.

Asked if he would be reluctant to promote new faces to the squad ahead of the World Cup, Mott said: ‘No, not really. For me, it’s about making good decisions at the right times and weighing up everything.

‘When you’ve been a great player, and you’ve delivered great things on a big stage, I think you deserve a bit of loyalty. And I’ve always believed that, in great teams, different types of players fire and they miss out.

‘You can hold that for a bit, and you get some currency from having delivered on the big stage – but at certain times, hard decisions need to be made.

‘Young players come in and add energy, and we have two players [Phil Salt and Harry Brook] on the sidelines, they are chomping at the bit for a game and I think that’s really healthy.

‘So that they’ve now got an opportunity to go back to the Hundred, get a mountain of runs, keep putting pressure on and be ready for when that opportunity does come.

‘It’s about making good decisions at the right times – it’s not that no-one in the team has mortgage on a spot. The nature of cricket suggests that at different times, players come in and out of form.’