Test stars Usman Khawaja and Nathan Lyon are available to play for the Sydney Thunder and Sydney Sixers on Wednesday in the final round of regular-season BBL matches, along with a handful of other Australian representatives.

Fresh off Ashes glory, Khawaja said he was planning to feature for the Thunder in their last match before finals, against the Melbourne Renegades at the MCG starting at 4.10pm (AEDT). 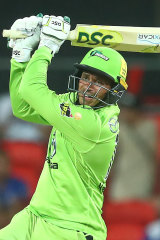 Usman Khawaja flashing his bat for the Sydney Thunder.Credit:Getty

“I plan to [play],” said Khawaja on Tuesday after arriving in Melbourne from Hobart, two days after Australia’s fifth Test victory over England. “[I am] pretty tired at the moment but I have a little bit of time … so looking forward to it.”

Khawaja was set to captain the Thunder this season before earning a call-up to the Test side. Chris Green and Jason Sangha have stepped up in his absence but will be thrilled to see the left-hander back in action heading into the finals.

After being overlooked for the first three Tests, Khawaja blasted twin centuries at the SCG, becoming the third player in history to do at the famous ground after Doug Walters and Ricky Ponting.

“I have wanted to play for Australia as much as possible over the last two years,” Khawaja said. “Obviously not playing for Australia didn’t change anything at all. I’m enjoying the cricket.” 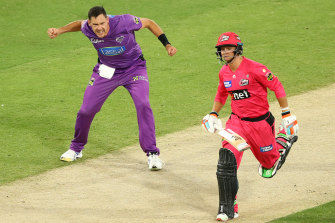 Scott Boland will return for the Hurricanes.Credit:Getty

Wednesday’s matches are important for the two Sydney franchises ahead of the BBL finals, which begin on Friday, and so too for Sixers skipper Moises Henriques, who brings up 100 BBL games.

The Sixers play the Brisbane Heat on Wednesday at the Gabba at 1.05pm (AEDT). They sit second on the ladder, despite having the same number of competition points as the third-ranked Thunder, due to a superior net run rate.

There is added incentive to finish second overall, given the top two ranked sides will square off in a “qualifier” match on Saturday. The winner will automatically advance to the final.

“It’s a huge motivator for us,” said Henriques a day after his side’s eight-wicket loss to the Strikers. “I thought [the Strikers] out-enthused us right from the word go. It was a shame to just not be ready mentally when there was so much on the line. Hopefully, we learn our lesson from that and we turn up tomorrow ready to go.”

Lyon, who finished the Ashes series with 16 wickets at 23.56, has been named in the Sixers squad. It has been nearly two years since he last represented the Sixers.

A decision will be made on Wednesday regarding Lyon’s availability.

“I’m not sure if he’s going to make himself available to play straight away or whether he’s going to have a few days off,” Henriques said.

Marnus Labuschagne is likely to play for the Heat against the Sixers.

Meanwhile, Scott Boland will line up for the Hobart Hurricanes in their match against the Melbourne Stars on Wednesday (7.50pm AEDT).

Returning Test players Alex Carey and Travis Head are also set to play in the Adelaide Strikers’ final on Friday.

Henriques said he was proud to have chalked up 100 BBL games for the same team.

“I played 100 games for the Sixers about five games ago but that was including Champions League,” Henriques said. “I’m proud that I have played at the one club. To be able to survive that long without getting the axe [is nice]. When you get to this age you start to accumulate those types of milestones. It’s a reminder of how old you are.”