Home » Сricket » ‘Like throwing to de Villiers’: Why coach rates Lanning among legends

Melbourne Stars coach Trent Woodhill is as forthright an operator as there is in world cricket. So when he compares working with Meg Lanning to training the likes of batting greats Kevin Pietersen and AB de Villiers, it's a major mark of respect.

It's also a reason why the Stars, having revamped their culture, are eying a breakthrough Women's Big Bash League title this week.

Lanning, the Australian and Stars captain, has added more power to her game, completing the regular season with 458 runs at 45.8, behind only Perth's Beth Mooney. Her consistency, noted by batting maverick Alyssa Healy, has included six half-centuries in 12 innings at a superb strike rate of 128.65. 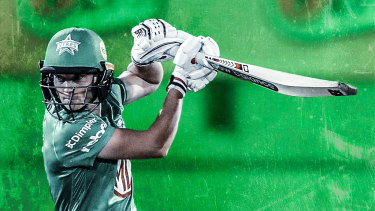 Meg Lanning has been pivotal for the Stars and Trent Woodhill says her change from four years ago has been “unbelievable”.Credit:Getty Images/Digitally altered

"I had a hit with Meg four years ago. I knew she was good but, in that four years, the change has been unbelievable. They have been some of my favourite net sessions," Woodhill told The Age and Sydney Morning Herald.

"Throwing to Meg is like throwing to AB, or throwing to a Maxwell or KP. Everyone will go, 'hang on a sec' but the things that we do, that little half hour, as we do with the men, it's brilliant. Her success rate and her ability to hit, the power that she is generating now and realising how much fun it is, it's just awesome."

I knew she was good but, in that four years, the change has been unbelievable.

Lanning's strike rate this season, an improvement on her international record (115.98), compares favourably with retired England great Pietersen (136.89 in 200 Twenty20 matches) but she still has work to do to catch arguably the greatest Twenty20 player of all time, South African de Villiers (150.19 in 325 matches).

Such is the intensity of the throw-downs, which have also benefited fellow Stars Annabel Sutherland and Nat Sciver, that they can only last for about 20 minutes.

"I don't have to teach them how to bat. It's just showing them a new way of training where they can have absolute fun. There is no policing what they do. All it's doing is teaching them fun," Woodhill said.

"It's learning your base and what you need to do and how you go from ball one. Some games you need to and some games you don't. It's recognising where your strengths are and loading them up."

Lanning returned into the Stars' fold this season at the request of new coach Woodhill, and the results have been telling. The Stars finished on top of the ladder, qualified for their first finals campaign and will take on the Perth Scorchers in a cut-throat semi-final at North Sydney Oval on Wednesday night.

Elyse Villani, replaced as skipper, has also been instrumental on the field (341 runs at 31, strike rate 123.1), in the Stars' rise as Lanning's opening partner and an off-field sounding board. 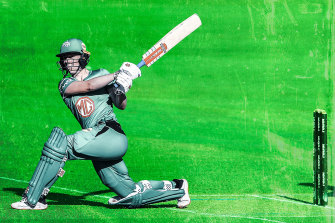 Elyse Villani has been invaluable of the field and off it, as Lanning’s vice-captain.Credit:Getty Images/digitally altered

Then comes South African run machine Mignon du Preez, who has 375 runs at 37.5, and even has Woodhill claiming she should be the player of the tournament. Sciver (194 runs at 32.33, strike rate 130.2, and equal tournament-high 18 wickets) is arguably the world's best all-rounder.

Woodhill has nothing but praise for fast bowler Katherine Brunt, who is engaged to fellow Englishwoman Sciver. 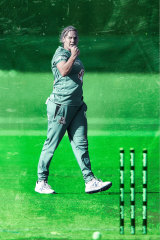 "Katherine was a really important get for us. Obviously, Nat and Katherine are a couple. They have been brilliant. Katherine, as a coach and player, has given us some grunt. She is such a competitor, she does such a good job with the young girls," he said.

Those young girls include all-rounder Sutherland, whom Woodhill says will eventually open the batting, and young quick Tess Flintoff. Sutherland and Flintoff, the latter with six wickets in two matches over the weekend, have been entrusted with big moments through the tournament. Leg-spinner Alana King has also been pivotal.

Lanning has embraced the manner in which she and Woodhill have worked. Woodhill said their roles were defined.

"I think the best feedback I have got is through Nat Sciver, who said: 'wwitched on when we are at practice and games and completely switched off when we are not,'" Woodhill said.

This has been particularly important living in a hub where players and coaches cannot escape each other.

"The synergy around the meetings is, whoever feels they need to speak can speak but Meg and I are very direct and very clear on our structures. On game day, she has complete control. On training day, I will work with the other coaches to set some things out," Woodhill said.

The men's Stars side could be forgiven for thinking it has been cursed, having lost three grand finals and five semi finals in the tournament's nine-year history. Yet the support that coach David Hussey, skipper Maxwell and Adam Zampa have given their WBBL counterparts has been much appreciated in a season when the squad has been away from home since early October.

"It's that club mentality, which is really nice," Woodhill said.