Nathan Lyon has bowled Australia to a second innings victory in succession in the second Test in Adelaide with his best ever performance against Pakistan.

Tim Paine’s team wrapped up a 2-0 series result with the second new ball on the fourth evening on Monday and will now break for nine days before resuming the home Test summer when their three-match series begins with the pink ball at Perth’s Optus Stadium on Thursday week. 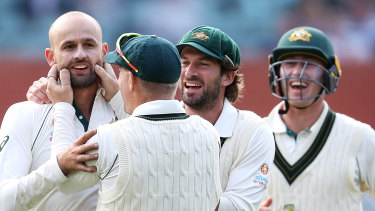 Nathan Lyon enjoyed a day out in Adelaide.Credit:Getty Images

It was the first time Australia had won a Test match in which they had lost three wickets or less, the final margin being an innings and 48 runs. It also added 60 valuable points to Australia's tally in the ICC Test Championship.

While David Warner’s 335 not out will be the prevailing memory of the match in years to come, it was Lyon who rose on what was the final day with play the lead role in finishing the job.

He had entered the series with a modest bowling average of 50 against Pakistan, who of all nations he had enjoyed the least success against in Test cricket in his eight years in the Australian team.

That was improved with a second-innings haul of 5-69 at his former home ground as Pakistan were bowled out for 239, the win completed when tailender Mohammad Abbas was run out by Pat Cummins when he wandered out of his crease at the non-striker’s end.

Pakistan batsman Shah Masood (68) , Asad Shafiq (57) and Mohammad Rizwan (45) mounted some resistance on Monday but they were always behind the game after Warner led Australia to a mammoth total and Paine enforced the follow-on.