Home » Сricket » MARTIN SAMUEL: Jimmy Anderson is the best… catch him while you can

MARTIN SAMUEL: Jimmy Anderson is simply the best seam bowler ever… Catch him while you can, if you can and whenever you can. However it may appear, he cannot last for ever

See the miracle man of modern English cricket: the quick bowler peaking at 39. That is the difference between Anderson and the majority of contemporaries across sport’s pantheon. 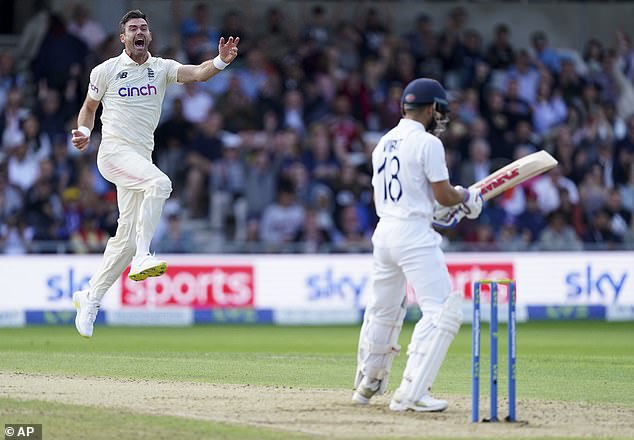 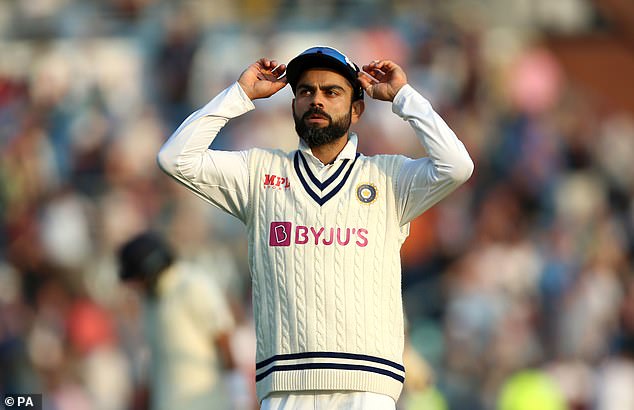 Federer and Nadal are being overtaken by Novak Djokovic. A defensive midfield player like N’Golo Kante, or even a creator like Jorginho would not be discussed as UEFA’s Player of the Year if Messi and Ronaldo were at their best.

Yet Anderson? Is there anyone doing it better? Not in this country, and arguably nowhere beyond.

At Headingley on Wednesday, Anderson broke India before drinks, let alone lunch. A full hour had not passed by the time he dismissed KL Rahul, Cheteshwar Pujara and Virat Kohli in a spell of 5.5 overs, costing just six runs.

He bowled another 13 balls and India did not play a scoring shot from any of them. Eight overs, five maidens, six runs, three wickets. The job was done. Anderson was not seen, ball in hand, again. 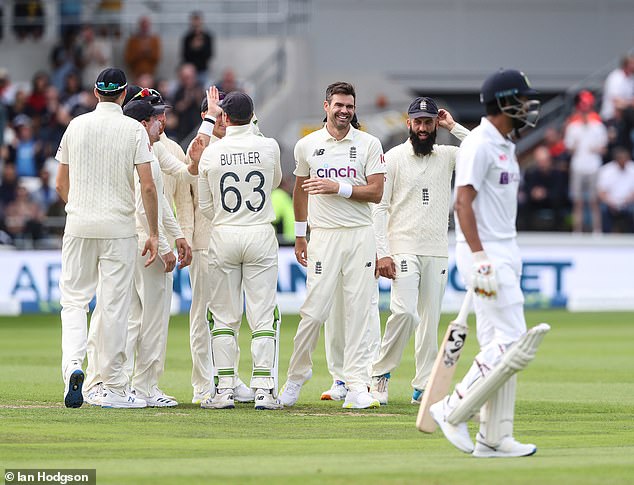 He did not need to be. India never recovered from his spell and slumped to 78 all out; their ninth-lowest score in Test cricket. Here was a quite brilliant riposte from England, inspired by a man who should be ensconced in a commentary box.

It was not just what Anderson did, either, but the example he set. No-one is too old to learn and England certainly did from the ill-disciplined calamity at Lord’s.

Anderson put down the marker, bowling fuller, displaying the control and persistence required to get England back into this series. Once he had ripped through India’s top order, the rest soon scattered.

England did not require Anderson to shoot out the tail — India were 67 for five and then 67 for nine — they just needed his team-mates to follow his lead. 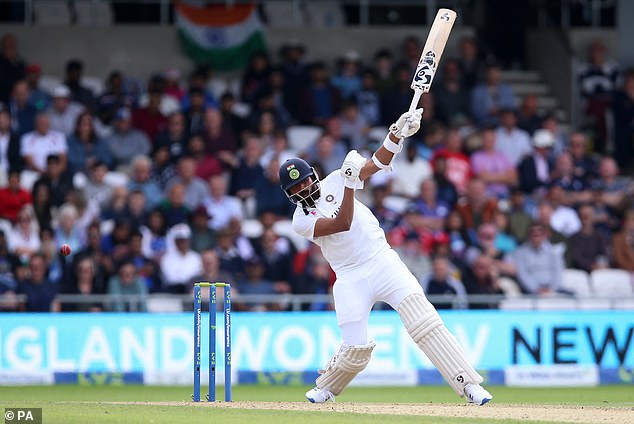 That they did, pitching the ball up and taking it away from the batsmen, rather than indulging in self-defeating short stuff. Anderson could happily look on, rested, vindicated. It was the 144th eight-over spell of his Test career, but there haven’t been many finer.

Phil Mickelson won the 2021 PGA Championship at the age of 50, but that was an outlying performance. He was ranked 115th in the world when he arrived at Kiawah Island. He had last won a major in 2013, hadn’t finished in the top 10 of one since 2016.

His subsequent major performances have been tied 62nd and a missed cut; he has managed just one finish in the top 20 in other tournaments, and is not even confident of making the USA Ryder Cup team, unheard of for a reigning major champion.

If Anderson’s figures on Wednesday were exceptional or unusual, if this was the first time in recent Tests he had chipped in for England, this could be considered like Mickelson’s sixth major; as one of those wonderful episodes that sport produces, a brief rage against the dying of the light. Tiger Woods’ 2019 US Masters; Jack Nicklaus at Augusta in 1986.

Yet Anderson is producing moments like this, still, year after year, series after series. In Chennai this winter he delivered, quite simply, one of the greatest overs ever bowled to reduce India to 92 for four from 92 for two.

In the first Test against the same storied opponents at Trent Bridge this summer he became the third highest wicket-taker in Test history; at Lord’s he took five for 62 in the first innings. And now this.

No wonder he bristles when it is suggested he might be too old to take on Australia this winter. Age is a number. And Anderson’s numbers just keep getting better. This was the seventh time he has taken the wicket of Kohli, the most of any pace bowler. He also got Sachin Tendulkar nine times, by the way.

And, yes, Anderson’s bowling is very much suited to English conditions. Yet spinners are suited to Asian conditions; it doesn’t detract from the ability of Muttiah Muralitharan, or his 800 Test wickets. 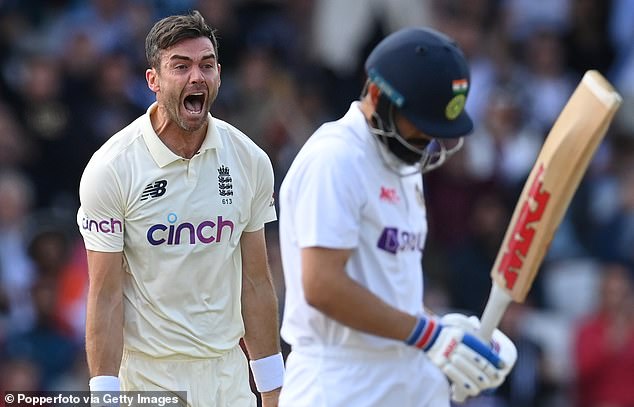 For while Stuart Broad rates the first-day wicket at Headingley as the best for bowling, Anderson simply has too many victims — 626 and counting — to always be blessed by cloud cover, seaming tracks or reverse swing. He is a genius at making things happen, as he did Wednesday morning.

His second wicket, that of Pujara, changed direction as if encountering a secret tilt button on a pinball table. All three were caught behind by Jos Buttler, a lesson in the art of persuasion. He coerced some of the most measured batsmen in Test cricket into surrendering their wickets cheaply, Kohli having won the toss and electing to bat.

India’s captain no doubt hoped to make capital from the way England’s bowling fell apart at Lord’s, to prey on a crisis of confidence, on mental frailty. He had reckoned without Anderson’s resolve.

He did not carry on the feud, he was not drawn into a fruitless battle of words. This was all business, all bowling, all about the set-up and the pay-off, like a good joke.

Except Anderson wasn’t laughing as he celebrated. He was howling, roaring, he knew this was how England should have answered India at Lord’s, when so much time and energy was wasted on petty aggression. Here was the antithesis of that performance. 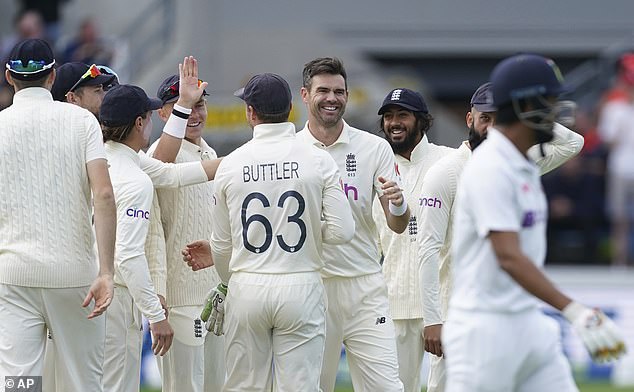 If there was one sore point it was that England faultlessly deployed the tactic that would have won the second Test. They didn’t bowl short, they didn’t bowl angry, they didn’t target the man, but that famed invisible corridor, and it was Anderson who showed how it’s done.

Some argue that a bowler who lasts as long as Anderson — 164 Tests and going strong — will amass wickets, but one wouldn’t make that argument in any other field. Titles are not won, goals are not scored and wickets are not taken just by hanging around long enough.

Equally, to reach 39, with all the attendant wear and tear of fast bowling, and remain fit enough to compete is a true athletic feat. Many bowlers 10 years younger are ruined physically. And while there may be an element of good genes and good fortune in longevity, Anderson’s evolution as a bowler has nothing to do with luck.

The nuances brought to his game sit happily with control and wisdom that comes from experience. Those at Headingley on Wednesday, stalwarts or first-timers, will be able to say they saw the greatest bowler who ever wobbled a seam.

Don’t miss out. Catch him while you can, if you can and whenever you can. However it may appear, he cannot last for ever.