The Melbourne Cricket Club has declared it would support a bid for a boost in attendance capacity if the MCG is granted a second Test next month, on a day Victorian Sports Minister Martin Pakula took aim at the NSW Government.

The Boxing Day Test between Australia and India began in a blaze of sun and wickets on Saturday, with the tourists dismantling the home team's top order in a stunning spell before lunch before a crowd that was well on its way to a limited capacity of 30,000 because of COVID-19 restrictions.

As Cricket Australia, the NSW and Queensland governments and broadcasters continued to debate where to stage the third Test – slated to be held at the SCG from January 7 – MCC boss Stuart Fox said his stadium was ready to host back-to-back Tests, if required. 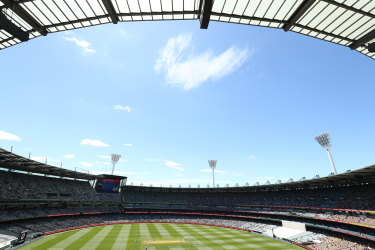 The stunning scenes at the MCG.Credit:Getty Images

"Yes we can, we are ready to go but, I have said all along, we really do hope it can stay in Sydney. It's a really, really special Test," he said.

"We have lost a major event here, it's no fun. I really do hope it gets away in Sydney but we are on standby, we are ready to go. There are a few challenges with that but, if we are needed, we are ready."

Should the MCG be granted the third Test, with Fox expecting a call within 48 hours, he said he would "love" the chance to have a larger capacity but that decision would be made by CA and the Victorian government.

"I would love it but we have to go do what's right for the community. If it's confirmed the MCG is hosting it, we go back to the government and re-submit another plan and they will have a look at it. It's more important we get this one away safely and then we will reassess after that," he said.

Pakula said the Victorian government and health officials had taken a cautious approach in terms of capacity for the Boxing Day Test, having last week agreed to allow an extra 5000 into the stadium.

"This was always going to be the event where we were more on the conservative side in terms of numbers. We want to test the processes," he said.

Pakula re-iterated that his government wanted Sydney to retain the third Test, one that raises money for the Jane McGrath Foundation, and he took a shot at NSW Deputy Premier John Barilaro.

"I am sure Cricket Australia would like to see a slightly bigger crowd if they could get it. I think our position on that is, let's wait and see for a decision on where the Test is," he said.

"If the Test is going to be at the MCG, then Cricket Australia would submit a plan. If it's for a slightly higher number, then that would be a matter for the CHO (chief health officer) to assess.

"When Victoria was having its issues, some ministers from north of the border, like Mr Barilaro, were actively trying to procure Victorian events (AFL grand final). I didn't enjoy that and I don't intend to behave like that myself, quite frankly.

"The Sydney Test is a very important game. It's the Jane McGrath Foundation fundraising Test, the pink Test … I really hope NSW get to a position where it can put that Test on. But as Stuart said, if we are needed, we are ready to go and, if we are needed, we will look and see what crowd numbers are once CA makes that call."

CA said on Saturday it would work with the government on increasing attendance numbers – should the MCG be awarded the Test.

MCG curator Matt Page said he needed about 10 days notice to ensure a second pitch was up to standard.

CA and host broadcasters Fox Cricket and Channel Seven remain locked in discussions with government and CA for there are major issues in terms of quarantining in Brisbane for camera crew and staff.