Australian captain Tim Paine has urged broadcast and events staff to make the "small sacrifice" of heading into a biosecure bubble to ensure the Sydney Test can proceed as planned from January 7.

With the Boxing Day Test less than 24 hours away, the location of the following Test – the third of the series against India – remains up in the air following the recent COVID-19 spike in NSW. However Cricket Australia is pulling out all stops to ensure the traditional SCG can be played. 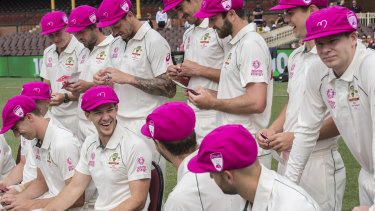 The Australian team ahead of last summer’s Sydney TestCredit:Steven Siewert

While CA is sweating on COVID-19 numbers in Sydney, the governing body is also working with the Queensland government to ensure around 100 events and broadcast staff will be allowed into Queensland ahead of the series-ending fourth Test at the Gabba.

CA is aiming for the broadcast and events personnel to follow the lead of the players by heading into a biosecure hub in the lead-up to the fourth Test ahead of their planned arrival into Brisbane on January 12, the day after the scheduled conclusion of the Sydney match.

The MCG is on standby for the third Test, however a proposal from NSW figures to have back-to-back Tests in Sydney – which would have circumvented the need to head to appease the Queensland government – fell flat.

While a bubble would be a foreign experience for the staff, it has become the norm for the nation’s leading players, some of whom have headed from hub to hub since the white-ball tour of England in September, which was followed by the Indian Premier League season in the UAE.

Speaking after training on Friday, Paine said he was hopeful staff would put their hands up to head into a bubble in order to allow the Sydney Test goes ahead.

"If that's what it takes to get the Sydney Test up and going, then whilst it's not ideal I think it's a small sacrifice for everyone to make," Paine said.

"I know the boys would certainly be excited to have another few people into the hub to talk to, I think we're getting sick of each other. If we get a few more people that we can chat to I think it would be good fun. That's a decision they'll have to make. As I've said before, the hub life is not that bad, it's not like we're in jail or anything like that, it's still a pretty good way of living. I don't think any of us complain."

He added that the Sydney Test – known for more than a decade as the "pink Test" for the McGrath Foundation – was a special event on the calendar.

"There's no doubt the New Year's Test in Sydney is a huge part of the Australian summer. And for our team, we've got so many guys from Sydney and NSW, so they love playing in front of their home crowds and having their families around, so hopefully that can get off the ground. I think at the moment that is the plan. I've been pushing hard behind the scenes for [Hobart's] Blundstone Arena if it's not but I don't think that's going to happen, so the next best place is the SCG."

Paine, meanwhile, acknowledged that the Boxing Day Test had a strange feel about it given capacity at the MCG is limited to 30,000 per day. But he said that was vastly better than nothing, which looked a distinct possibility as Victoria battled through a horrendous winter.

"It's going to be different isn't it. Seeing the MCG sometimes with 30,000 you're a bit disappointed when you turn up and I think tomorrow again it's going to have a completely different feel. Victoria's had harsher lockdowns than most of us, so to have 30,000 people there, if you had have told us that a few months ago I don't think we would have believed you. I think we're just lucky to be playing a Boxing Day Test at the MCG."