Perth’s hold on a men’s Ashes Test is getting shakier by the day despite the city playing host to a glittering grand finale to the AFL season, as Cricket Western Australia makes a despairing bid for a reshuffle of venues for the series against England.

Cricket Australia is not publicly countenancing any change to the published schedule for the Ashes, meaning Perth still stands as host for the fifth and final match of the series – after the Boxing Day and New Year’s swing through Melbourne and Sydney. 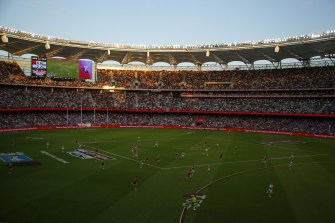 This sequence, as publicly acknowledged by the Cricket WA chief executive Christina Matthews, runs headlong into the WA government’s insistence that the border will remain closed to states managing COVID-19 until well into next year.

As a consequence, Matthews has floated to CA’s chief executive Nick Hockley a scenario whereby Perth hosts one of the first three Ashes Tests before the series finishes in Melbourne and Sydney.

At the same time, the cautiously warm response to Ashes protocols passed from CA to the ECB last week has entrenched Queensland as the arrival point for the touring England team in a couple of groups either side of the Twenty20 World Cup in the UAE.

England’s players and staff are set to be granted resort-style quarantine in Queensland, with freedom of movement within the resort compound and the ability to train under supervision for a few hours a day during their first 14 days in Australia.

Partners and families who arrive with either of the two touring groups will also be able to quarantine in resort-style accommodation.

Once clear of quarantine, players, staff and families would be afforded a modicum of freedoms that would apply to both sides. Outdoor dining, cafe visits and exercise will allow the touring team an “experience” of Australia beyond the monotony of hotel rooms and cricket grounds.

Similar provisions would have to be made by the WA government in order for one of the the first three Tests of the series to be moved across the country. CA is adamant that the Boxing Day and New Year’s Tests will not be moving from their traditional venues.

At present, only residents in South Australia, Tasmania and the Northern Territory are permitted to travel to WA without undergoing 14 days of quarantine before they can move freely within the state. WA requires states to have had 28 days without any community transmission of COVID-19 before waiving the quarantine requirement.

In order to play the AFL grand final in Perth, the league airlifted a host of staff and media from the eastern states to Western Australia in enough time for all to undergo 14 days of hard quarantine before their entry into the community, as other finals matches went on in the meantime.

Such a manoeuvre would be impossible within the framework of the Ashes. The biggest gap between Test matches is just five days. Broadcasters privately concede that it is hard to envisage a workable scenario for getting the teams, match officials and production staff into Perth unless it is the venue for the first Test.

Perth has not hosted a Test since the first match of the series against New Zealand in mid-December 2019. The men’s Test against Afghanistan last season was postponed, while this season the women’s Test against India was moved from the WACA Ground to the Gold Coast.

In the event that Perth does not host the fifth Test, CA has the option of playing another match in Sydney, Melbourne or Adelaide, where the South Australian premier Steven Marshall has committed to opening the state border once 80 per cent double vaccination rates are achieved, most likely in mid-December.

Alternatively, Hobart’s Bellerive Oval is a chance of hosting its first-ever Ashes Test given current grave doubts surrounding the scheduled men’s Test against Afghanistan in late November. Canberra’s Manuka Oval is another option.