Will Pucovski is unlucky to feature in the Ashes this summer, according to chairman of selectors George Bailey and Victorian coach Chris Rogers.

The batting prodigy’s hopes of appearing in a maiden Ashes series appear to be dashed after he suffered the 10th concussion of his short career in the nets last month. 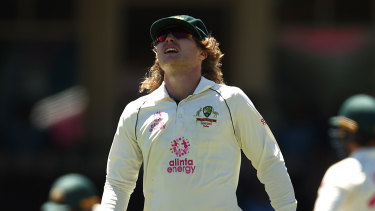 Will Pucovski has not taken part in practice matches for Victoria as he recovers from a shoulder reconstruction.Credit:Ryan Pierse, Getty Images

Initial thoughts that Pucovski could feature in a Sheffield Shield match before the first Test begins on December 8 have not panned out.

Pucovski was not named in Australia’s 15-man Ashes squad on Wednesday, or even in a group of 11 extra players who will help make up the numbers in a three-day intra-squad game on December 1 before an Australia A fixture against the England Lions starting December 9.

The 23-year-old, who made scores of 62 and 10 on Test debut against India at the SCG in January, will be given all the time he needs by medical staff to recover from his latest head knock. Pucovski’s issue, if indeed he feels well enough to begin batting again, will then be finding opportunities in the middle.

Bailey was asked if there was any way Pucovski could feature in the Ashes, having not played a proper match since January.

“It’s probably unlikely,” Bailey said. “He hasn’t played any cricket up until this point.

“It’s about getting symptom-free and feeling good physically and then secondly, it’s about just putting together a batch of games.

As expected, Pucovski won’t feature for Victoria in their upcoming Shield game against NSW at the SCG, beginning on Friday.

“I can’t see how he’ll get the opportunity to show he’s ready [for the Ashes],” Rogers said.

“Will is still feeling it a little bit, still a few symptoms. He won’t play Big Bash. He’ll probably see how he can get himself right, play some club cricket, whether that’s before Christmas or after [I am not sure].”

David Warner and Marcus Harris are poised to be Australia’s openers at the Gabba, with Bailey once again suggesting the latter was the right man to feature in the first Test.

“We’d love nothing more than to be able to back him in and give him an extended run at the top of the order,” Bailey said. “We know how important opening partnerships are. Trying to forge a really strong relationship with Davey at the top is really important for our Test team.”

“The forgotten man of Australian cricket is Matt Renshaw,” Waugh said. “I’m not close enough to know why he is batting middle order for Queensland but he is a serious run-scorer and is proven at Test level.

“He’s got a good technique but for some reason he is not the flavour of the day. I thought he made an amazing Test debut under lights in Adelaide in difficult conditions. He scored slowly but survived. I think he hasn’t got the credits he deserves while playing. So I wouldn’t rule him out either.

“Pucovski is obviously a quality player but has his issues. I would be picking guys who have a good technique and not necessarily the guys who hit 150 or 200 against a weak bowling attack in good conditions, but someone who gets a 50 in tough conditions. That is probably more like a Test innings.”