Kyle Mayers cracked the first shot heard round the world this Australian season, before the hosts wriggled out of batting troubles to run down the West Indies in what was effectively a Twenty20 World Cup warm-up game on the Gold Coast.

A majestic, physics-defying back foot cover drive for six by Mayers off Pat Cummins demonstrated the talent within a Caribbean side missing luminaries such as Andre Russell, Chris Gayle and Kieron Pollard. But an otherwise uneven batting display gave Australia a reachable target on a fresh pitch. 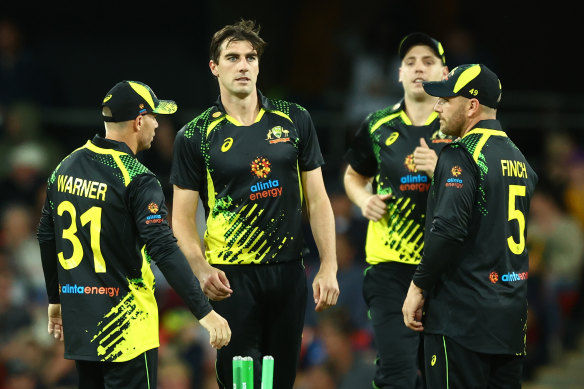 Pat Cummins of Australia celebrates dismissing Kyle Mayers of West Indies during game one of the T20 International series.Credit:Getty Images

That was just as well, because the recast order set out by captain Aaron Finch spluttered badly until he and deputy Matthew Wade settled things down in a stand worth 69 from 56 balls to help bring a three-wicket victory.

Finch’s 58 was his best score for Australia on home soil in any format since December 2020, a performance made still more significant for the fact it arrived in the No. 4 spot vacated by Steve Smith.

Australia’s selectors had shown they are prepared to drop Smith from the T20 side in their World Cup defence and also shuffle Finch down the order to accommodate Cameron Green.

The returning David Warner and Mitchell Marsh each fell quickly in the chase for 146 to win, before Green’s exit for 14 was swiftly followed by those of an out of sorts Glenn Maxwell and Tim David. At 5-58, the Australians were up against it, only for Finch and Wade (39 not out) to regroup.

When Finch miscued a decidedly swift Alzarri Joseph (2-17), 19 were still needed. But Wade and Mitchell Starc clumped the 11 needed from Sheldon Cottrell’s last over with a ball to spare – helped by dropped catches from Raymon Reifer and Mayers.

The leg spinner Yannic Cariah bowled an exemplary four-over spell, claiming 1-15, after Adam Zampa (0-21) had also been influential in the West Indian innings.

In a strong signal to the absent Marcus Stoinis and not yet fully fit Mitch Marsh, Green’s retention as an opener alongside Warner indicated that the national selectors and captain Finch are seriously weighing up how to use the 23-year-old allrounder.

“Greeny’s been good nick opening the batting, so we’re just trying a few things over the next couple of games,” Finch said at the change of innings, asserting that he had chosen the batting order. 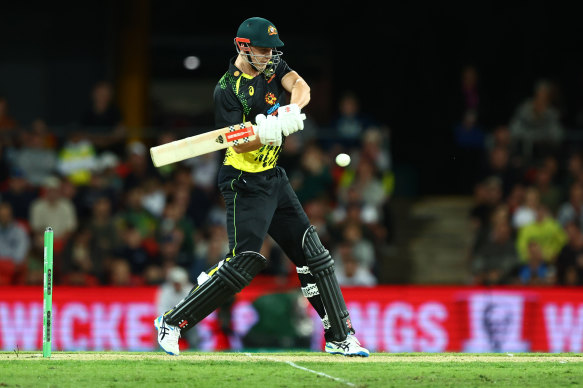 Cameron Green of Australia bats during game one of the T20 International series between Australia and the West Indies.Credit:Getty Images

Green effectively forced the conversation by clouting some of the world’s best T20 bowlers to all parts during the recent brief tour of India, granted a chance at the top of the order with Warner rested from the trip.

Finch, meanwhile, has batted in the middle order for Australia and also domestic T20 sides in the past, making use of his ability to attack spin bowlers and reducing the chance he might be swiftly plucked out by the swinging new ball. 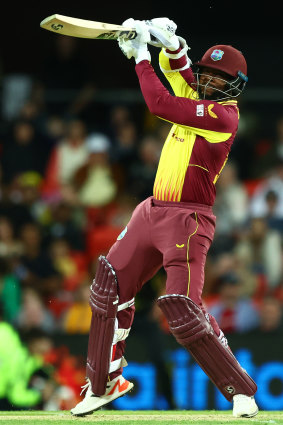 Kyle Mayers of West Indies bats during game one of the T20 International series between Australia and the West Indies.Credit:Getty Images

That move down the order in turn forced out Smith, arguably the best Test batter in the game but a somewhat diminished force in the T20 arena – during last year’s global tournament he played throughout but had precious little impact.

David kept his place at six after a promising international debut in India. Having played a domineering role for multiple T20 franchise teams including in the IPL, David is regarded as a proven quantity in one of the format’s toughest gigs.

In all, it looked like a lineup devised to best balance Australia’s resources should Stoinis not recover from a side strain in time to take his place in the Cup squad.

The West Indian innings had illustrated the inconsistency that has forced Nicholas Pooran’s team into the qualifying round of the World Cup that starts in Geelong on October 16.

A fruitful first four overs reaping 47 were followed by the loss of 4-48 from the next 10, followed by a far more lively 50 from the final five.