The SCG will launch an audacious bid to host the fifth Ashes Test as a day-night match with a pink ball.

It has been reported that Melbourne and Hobart are the only two cities slugging it out for the Test after CA announced on Monday that Perth had lost hosting rights because of Western Australia’s hard border restrictions.

The Herald and The Age can reveal Venues NSW chairman Tony Shepherd has been preparing a bid after discussing the matter with NSW Deputy Premier Stuart Ayres.

Shepherd confirmed the SCG’s interest when contacted on Tuesday night.

“We’re very enthusiastic to hold the fifth Test — with a pink ball,” he said. “We think a day-night Test would be very attractive to the local community and visitors who come to Sydney throughout January.

“We’re working with the state government about it right now about making a bid. At the moment, we have a sports-mad premier in Dominic Perrottet, a sports-mad deputy in Stuart Ayres, and a sports-mad sports minister in Natalie Ward. 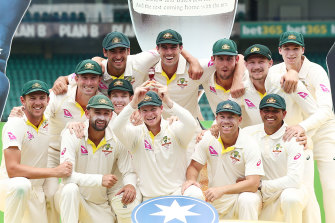 Then-skipper Steve Smith and his Australian teammates celebrate the 2018 Ashes series win at the SCG.Credit:Getty

“They want the match in Sydney.”

Sydney will host the fourth Test from January 5-9, which is traditionally the final Test of the summer. The fifth match is scheduled to begin on Saturday, January 15.

There is a strong push for Hobart to be given hosting rights after the Test between Australia and Afghanistan scheduled for his summer was cancelled.

The MCG, though, is hopeful the fifth Test will be played in Melbourne. There are reports this is the preferred location for broadcasters Fox Sports and Seven.

For some reason, the SCG has been forgotten in the debate, presumably because of concerns the Sydney market could not sustain back-to-back Tests.

Shepherd argues a pink-ball Test would appeal greatly to Sydneysiders.

“The humidity at night would see the ball swing a lot more,” he said. “I can’t see any downside. A beautiful night at the SCG, with the lights on, two of the best teams in the world going at each other … It’s something different and would be a fantastic way to finish off the Ashes series.”

What will likely decide the matter is money with CA looking to leverage the situation to boost revenue.

When COVID-19 threw the schedule for last summer’s series against India into disarray, the asking price was about $3 million to host a Test outside the traditional venues.