Home » Сricket » ‘She is a warrior’: Mooney in line for Ashes Test 10 days after breaking jaw

Star batter Beth Mooney could make an “incredible” recovery and pad up for Australia in the Ashes Test from Thursday, just eight days after having surgery for a broken jaw that was expected to sideline her for weeks or even months.

The news came as Australian and English players urged officials to schedule reserve days in future Ashes series after the second of three scheduled T20 games in the multi-format series was washed out at Adelaide Oval on Sunday.

Australia, who won the opening T20 game last week, and England will now turn their attention to the Test in Canberra, which will be played at Manuka Oval from January 27 to 30.

Australia coach Matthew Mott made the remarkable call that Mooney could be selected to play in the game, despite breaking her jaw while batting during a net session last Monday.

The 28-year-old had surgery on Tuesday but returned to the group on Friday, and Mooney could be seen running laps of Adelaide Oval on Sunday during the rain delay, with Mott declaring she is in “good nick”.

“We will certainly look at her for the Test match. All the indications are looking positive,” Mott said.

“She’s a warrior, she’s tough, and we can’t wait to have her back in our group.” 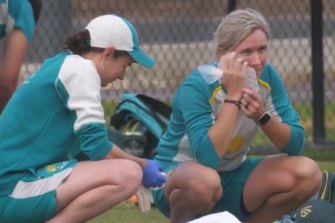 Originally, Cricket Australia said it would make a call post-injury on whether Mooney would even be available for the March World Cup in New Zealand.

Instead, the world’s best T20 batter has bounced back within a matter days, with vice-captain Rachael Haynes calling the feat “incredible”.

“Over the last couple of days, the swelling around her face is going down quite substantially. She’s feeling really confident,” Haynes said on Sunday.

“By all accounts, she’s not in any pain or anything like that. Without a doubt, she’s definitely got our eye on that Test match in Canberra.”

The side has played just one T20 game in her absence, as both Saturday and Sunday’s T20 clashes against England were abandoned due to rain.

“I just want to get into a series,” Haynes said about the frustration of missing Ashes matches due to the weather.

“To have a couple of games washed out just isn’t ideal.”

“They will be useful if they can be worked in,” Knight said.

“And potentially a five-day Test match, I think, would make things better for everyone – for the players and for the viewers – to make sure you don’t miss cricket and miss the contest that you want to see.”

The two abandoned games saw both sides receive one point each for each clash, with Australia going into the Test match with a 4-2 advantage.

Knight said the Test – which sees the winner awarded four points – is now vital for England.

“We’ll have a sit down as a group and try and work out the best strategy to try and win the game and take that four points,” she said.

“Obviously, it’s frustrating that we haven’t been able to play these two games. But if we can get a win in that Test match it will put us in a really strong position going into the ODIs.”

Meanwhile, there is frustration within the Australian camp as news broke the World Cup in March would not be broadcast in Australia on free-to-air TV.

On Sunday, Nine – the owner of this masthead – announced they would be screening the men’s T20 World Cup later this year, and next year’s men’s One-Day World Cup.

But no FTA channel has picked up the rights to screen the women’s ODI World Cup, and Australian wicketkeeper Alyssa Healy said the news is “hard to take”.

“I think it’s a little bit of a slap in the face to say that we’re not commercially viable and that someone doesn’t want to stick their hand up and say we’re going to put this on the telly, so that everyone can watch it,” she said.