Sydney Sixers coach Ben Sawyer has hit back at criticism of Ellyse Perry's post-injury form after the star-studded side missed out on the WBBL finals for a second straight year on Sunday.

Despite the Sixers boasting big names like Perry, Ash Gardner and Alyssa Healy, they were not consistent enough and slumped to five straight losses mid-season. 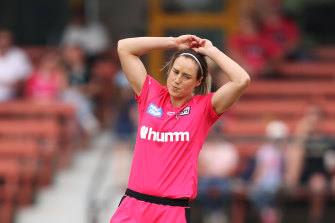 All-rounder Ellyse Perry went for 0/46 from her three overs on Sunday.Credit:Getty

Some blame was directed at Perry, who went for 0/46 from her three overs on Sunday. Sawyer defended her form after criticism from fans and commentators.

Perry returned from a hamstring injury before the WBBL season with some questioning whether the 30-year-old should continue as an all-rounder.

"I don't think [the criticism] is [justified]," Sawyer said. "At times this year, she bowled really well and I was just really proud of the fact she stood up as the captain [on Sunday] and decided to bowl those tough overs at the end."

"You won't get me criticising her," Sawyer said. "I will back her any day of the week. She is coming back off a major injury and she still is part of our power play that was second-best of the competition.

"Up front, she was taking tough wickets for us and bowling tough overs at the end."

As for Sunday's game, Sawyer said when the Stars reached 178 he told the Sixers to focus on winning.

"If we could have bowled them out for 100 or even 120 we might have had a crack but when it was 180 it is literally a four every single ball," he said. "Sometimes you've got to admit defeat and we thought, 'let's just do our best to win another game of cricket'."

Sawyer told his players to work on their form during the off-season.

Sawyer said the Sixers were not helped by the loss of Gardner, who was ruled out midway through the season due to concussion.

"It's not an excuse and she needed to have the time off with the concussion, but I'd be lying if I said it wasn't a blow and it didn't make things tougher," he said.