Steve Smith’s return to leadership has been hailed as a key landmark in the healing process from the scars of the sandpaper affair, as Pat Cummins’ revolutionary appointment as an Australian fast-bowling Test captain was given the rubber stamp by one of the country’s finest leaders.

The selection of Smith to be Cummins’ deputy was met with opposition from former greats Greg Chappell and Shane Warne, but the superstar batter has been given a strong endorsement from one of the people who stripped him of the captaincy in 2018.

Former skipper and Cricket Australia board member Mark Taylor has long believed Smith deserved to be given a second chance to right the wrongs of Cape Town, and though the 32-year-old has not been given a crack at the full redemptive story he wanted, he still has the platform to win back the fans he lost.

Some of the Australian public will never forgive Smith for his failure of leadership, but another mountain of Ashes runs backed up by loyal service as Cummins’ lieutenant in a successful campaign has the power to move others yet to come around to him. 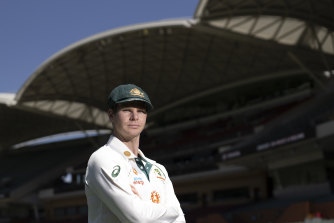 Steve Smith’s return to an official leadership position is a chance for him to continue healing process after the ball tampering scandal, says Mark Taylor.Credit:Getty

“He’d be foolish to think he’ll ever win everyone back again,” Taylor said. “I don’t think he’d be too disappointed, he may well have wanted to become captain again, but I don’t see Steve Smith at home bashing the desk.

“I see Steve Smith being a bit more pragmatic about it and thinking,‘Well, ok, three-and-a-half years ago, I had the worst moments of my cricket life, where I turned a blind eye to something I shouldn’t have. I’ve learned from that, and now I’m slowly making my way back to the leadership of the Australian cricket team.’

“I would see it as part of the healing process, if that’s the right way to put it, and an opportunity for him to work behind the scenes. As Pat will say, it will be more open than we all thought, he’ll almost be handing the reins to Steven at times.

“He’s got an opportunity now to be involved in the game as a leader, albeit not as openly. I think if he does a lot of good things, which I’m sure he will for Australian cricket, it will even help heal the wounds from Cape Town nearly four years ago.”

If Smith harboured any disappointment at being overlooked for the top job, it was well concealed on Friday as he pledged to be the model right-hand man to Cummins.

The freshly inaugurated leader has already indicated he will be leaning on his vice-captain more so than any of his predecessors. The idea of the captain delegating on-field responsibilities will be hard for many in Australian cricket to digest but Taylor, a self-described traditionalist, says it’s time to consider the new world order.

“I think he’s handling it the right way. This is going to be very different. I think all of us ex-captains in a way we’ve had a similar type plan – the captain runs the cricket team,” Taylor said.

“That will be the case under Pat, no doubt about it. He’s already admitted by saying he wants Steve Smith to take an active role at times. That’s something I don’t think I’ve heard from any Australian captain in the past, so I think it’s going to be a bit more of a collaborative approach, which I think is a good thing.

“Straight away Pat’s already setting the ground rules that this will be different, so all of us who have an opinion on how the Australian cricket team should be run have to think a little bit differently because this will be a changing of the guard.”