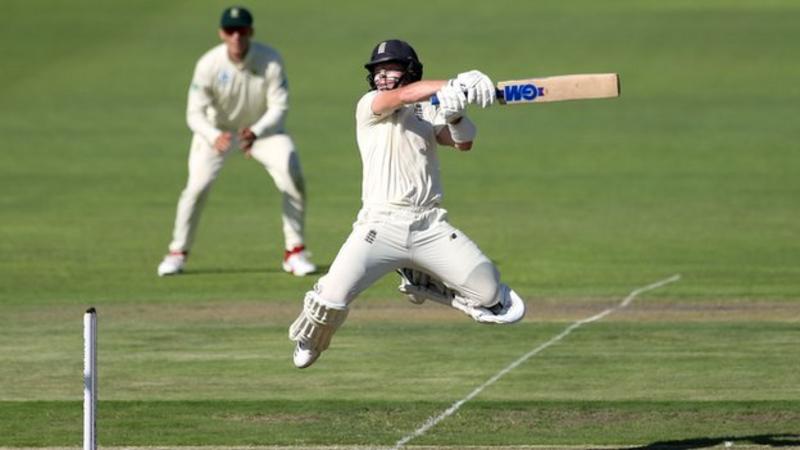 An unbroken stand of 76 between Ben Stokes and Ollie Pope gave England a slight edge over South Africa at the end of a fluctuating first day of the third Test in Port Elizabeth.

On a lifeless pitch, the tourists were in danger of being overwhelmed when they lost three wickets for 35 runs to slip to 148-4.

But Stokes solidly moved to 38 not out and Pope shone in his unbeaten 39 to take England to 224-4 at the close.

They will return on Friday looking to buck a trend which has seen the rest of the top order fail to capitalise on good starts.

When Dom Sibley and Zak Crawley were adding 70 for the first wicket, it appeared as though England were going to take full advantage of winning the toss.

However, South Africa wrestled their way into the contest thanks mainly to superb spinner Keshav Maharaj and the tactics of captain Faf du Plessis.

Only late in the day, as the second new ball was repelled for 10 overs, did England take the advantage, especially with the hosts set to bat last on a surface that is likely to deteriorate.

Still, wickets early on day two would shift the momentum again, meaning the series – level at 1-1 – remains in the balance.

This was a slow-burning day, one which gave no clue to its eventual fluctuations in a tepid morning session.

Under a cloudless sky and on a straw-coloured pitch, Sibley and Crawley batted to lunch with few alarms and there was more energy in the band that played in the stand than there was in the contest.

That changed when left-arm spinner Maharaj took a grip of one end, stifling the tourists and allowing the pace bowlers to nag away from the other.

If the battle in the afternoon session was gripping, England doing their best to repel the South African effort, the hosts threatened to take control after tea when Joe Denly and Joe Root were dismissed in quick succession.

At that stage, it could have can been argued England were not showing enough intent to score, although that would have ignored the quality of the South Africa bowling and the impact of the pitch.

Ultimately, the tourists have a platform for a large total, one that could heavily pressurise a South Africa side, especially with the pitch already offering turn.

Even if there were times when England were too ponderous in their approach with the bat, that is at least a change to the policy under former coach Trevor Bayliss, when extreme aggression in similar situations often led to batting capitulations.

Sibley looked to be carrying on from his second-Test century for his 36, while Crawley was less convincing – especially against the short ball – in making 44.

Of the top four, Denly found it hardest to score, completely smothered by Maharaj before he was lbw to the same bowler for 25, and Root tried to force the issue in his 27.

All, though, were overshadowed by Pope, the 22-year-old who is increasingly looking at home in Test cricket. He scored with handsome drives on both sides of the wicket and hit three successive fours in Anrich Nortje’s first over with the new ball.

At the other end, Stokes, England’s match-winner in the second Test and the newly crowned International Cricket Council player of the year, settled in.

As a sign of the regard he is held in by South Africa, three times they called for reviews against him, with two so speculative they were lost.

In the morning session, South Africa’s tactics were curious and their bowling lacklustre. The Proteas opted for debutant Dane Paterson to take the new ball ahead of Kagiso Rabada, both men part of a pace unit that collectively bowled too short.

The improvement in the afternoon session was stark, the wily Maharaj conceding less than two runs an over in an unchanged spell of 30 overs and the fast bowlers executing Du Plessis’ plan.

Targeting the stumps with as many as six fielders on the leg side, South Africa persuaded Sibley to turn Rabada to leg gully, where Rassie van der Dussen took a superb diving catch.

Crawley fell into the same trap, clipping Nortje to Dean Elgar behind square on the leg side.

Maharaj finally had his reward when wicketkeeper Quinton de Kock persuaded Du Plessis to call for an lbw review against Denly, while Rabada scuttled one into the top of Root’s off stump.

Only late in the day did the home threat drop, unsurprising given the sapping heat and the effort required for the bowlers to get something out of the pitch.

‘It has been a really good day for England’

Former England assistant coach Paul Farbrace on The Cricket Social: “It has been a really good day for England. The first two batsmen played very nicely and they gave England a good chance.

“It got tough for a period; it was really hard to score and to trust the bounce of the ball. Pope was allowed to play well by how well they played earlier.”

England batsman Zak Crawley told the Test Match Special podcast: “We’re happy with that. The pitch is only going to get worse from here. If we can bat well tomorrow and put ourselves in a good position, a first-innings lead would be very nice. The pitch was slow, so it was tough to score. There wasn’t a lot in it for batters or bowlers.”

BBC cricket correspondent Jonathan Agnew: “It has been a rollercoaster of a day, in a quiet sort of way. It looked like a nailed-on five-day game, but on came Maharaj and it was kicking up.

“You assume that bounce is going to get worse as the game goes on. If England can get 350 from here, that’s a pretty good position.”

Former England spinner Phil Tufnell: “England will have learnt a lot with the bowling. It’s going to be one of those pitches when you bowl straight, with split fields, and if you do that it’s very difficult to score runs on. A 350 total becomes more like 450.”