There is something about the number 62 for Steve Smith.

Only 48 hours after clocking the third fastest one-day international hundred for Australia, he did it again with a statistically carbon copy century in the second ODI against India at the SCG. 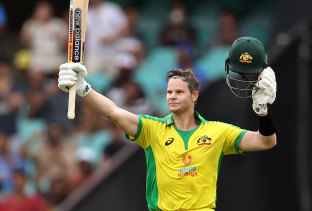 Smith had arrived on a charter flight from Dubai earlier this month having struggled for runs in the Indian Premier League over the previous couple of months but said before this series he had rediscovered his mojo in the nets in Sydney’s far west during the quarantine period as former Australia captain Ricky Ponting hurled balls at him.

He wasn’t wrong. Whatever the master batsman was doing behind closed doors at Blacktown over the past fortnight looked to have set up the summer for Australia until David Warner left the ground in agony with a groin injury, casting doubt about his status for the rest of the limited-overs campaign and the Test series.

There was light and shade from Smith on a stinker of a Sunday as he sprinted to three figures with 40 runs in 19 balls. A case in point was the 40th over where, facing Jasprit Bumrah, he began by smacking a slower ball beyond point for four, then executed the most gentle of late cuts past ‘keeper KL Rahul for another via a vacant third man and finally produced a third with an elegant glance through fine leg. In the next over, he lifted Yuzvendra Chahal down the ground for six and pushed a leg break to mid-on casually to bring up his hundred.

While it was the furthest thing from Warner's mind as he was driven offsite for scans, the left-hander and Finch continued to cement their place among the very best top-order pairs over the years with their fourth ODI stand of 100 or more this year – the most of any opening partnership in the world in 2020.

It took them past David Boon and Geoff Marsh to rise to eighth on the all-time list of top-scoring one-day opening pairs and third among Australians. Their 3638 runs together put them well behind the leaders, Sachin Tendulkar and Sourav Ganguly (6609) and Australia’s most prolific, Adam Gilchrist and Matthew Hayden (5372), but their average partnership of 52.7 is now higher than any other pair in the all-time top 15, with Sunday’s display putting them ahead of legendary West Indians Gordon Greenidge and Desmond Haynes.