Home » Сricket » The Ashes 2021-22 in Sydney, fourth Test, day one LIVE: Australia win the toss and bat at SCG

Broad back for England

England have recalled Stuart Broad for the fourth Test at the SCG, with stand-in coach Graham Thorpe labelling the veteran pace bowler, as well as struggling all-rounder Ben Stokes, “caged tigers” with plenty to prove after poor performances in this Ashes series.

Thorpe was happy to confirm England’s XI on Tuesday, which features Broad at the expense of Ollie Robinson, who has been nursing a shoulder injury.

Broad was overlooked for the first Test at the Gabba and dropped for England’s most recent humiliation – an innings and 14-run defeat at the MCG.

The 35-year-old got his chance in the pink ball Test in Adelaide but returned underwhelming figures of 2-100.

Broad, with 526 Test wickets to his name, has spoken about his non-selection frustration in recent newspaper columns. With the Ashes urn now firmly in Australia’s grasp with two Tests to play – following big wins in Brisbane, Adelaide and Melbourne – he will be hoping to restore some pride at a ground where he averages 48.6 with the ball from two Test outings. 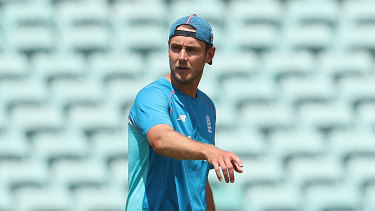 Joe Root says he would have batted

Luck just isn’t on England’s side at the moment.

Australia win the toss and … bat

Cummins says Australia will have a bat at the SCG.

Not going to the SCG Test because of COVID? Neither is Pat Cummins’ sister

‘Australian captain Pat Cummins’ family is a microcosm of the dilemmas posed by an unrestricted, COVID-affected New Year’s Test match at the SCG.

And the dilemma is this, essentially: should you stay, or should you go?

Cummins is used to providing a big book of complimentary tickets for family and friends but was informed this week by his younger sister Kara that her group had been affected by COVID, meaning that she, and they, would not be able to attend.

“First thing you do is get vaccinated and then it’s kind of up to you to be cautious,” Cummins said on match eve. “I know, chatting to my sister, she had about 15 friends lined up [for tickets] and I think half of them have got COVID, so they won’t be coming.

“But it’s a sign of the times, it’s really good we’re going to have fans – last week at the MCG was fantastic, 50 to 60,000 people on Boxing Day, so we’re semi-arm’s length from everyone, and hopefully it’s still a decent crowd out here.”’ 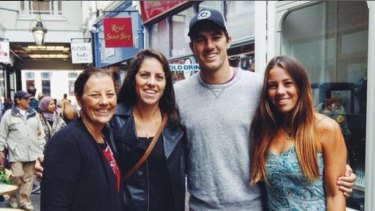 Pat Cummins with his mum, and sisters Laura and Kara. Credit:Instagram

Some colour from the SCG

The threat of Covid and dodgy weather has not deterred the crowds at the SCG, with a long queue of members filling the cattle grids by 7am and thousands swarming the concourse with half an hour before play was due to start.

A masked Jason Holt said he had received his third vaccination and was willing to brave the crowds, though it was on his mind. His friend, Lizzie Palmer, said she was impressed by the number of people in masks, given she had just flown in from London where everyone gave up on them three months ago.

“I’m more worried about the weather,” she said.

But inside the grounds, it seems plenty have stayed away, with the top of the Members the only stand without a spare seat. The bottom of the Noble and Bradman stands were almost empty. 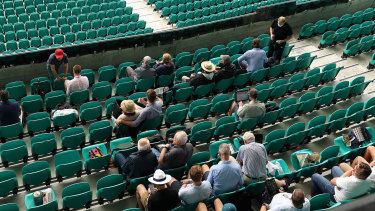 Fans make their way into the SCG. Credit:Getty

Who’s your money on?

Here are the teams for this Test

Play delayed half an hour

We have some news from the SCG.

The toss will be delayed by 30 minutes and will take place at 10:30am.

Play will begin at 11am, 30 minutes later than scheduled. Happy days.

Covers are coming off at the SCG

Good news here at the SCG, with the covers coming off and a little bit of sun peeping through the clouds.

We might be looking at a 10:30am start time if things go to plan. We’ll keep you posted.

Players are out in the middle warming up. Fingers crossed the rain stays away. 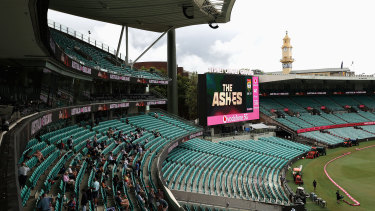 The SCG on Wednesday morning. Credit:Getty

Cummins delighted Boland, his ‘bulldozer bowler’, won’t be a one Test wonder

In case you missed the news yesterday, Scott Boland has earned a second Test cap, with Australia keeping Josh Hazlewood back for one more Test. Malcolm Conn spoke to captain Pat Cummins about the news yesterday.

Cummins had himself travelled the journey of a spectacular Test debut followed by years in the wilderness and wants Boland to savour his second Test in a week as Australia strives to go 4-0 up against a beleaguered England.

“I spent about five years sitting on one Test and I hated it when people talked about it because I felt I hadn’t proven anything,” said Cummins, who was man of the match in his first Test as an 18-year-old then battled a series of bone stress injuries.’ 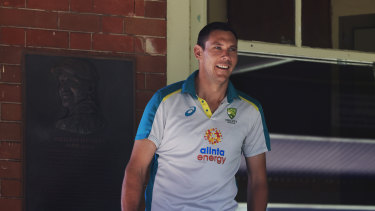 Scott Boland at the SCG on Sunday. Credit:Getty