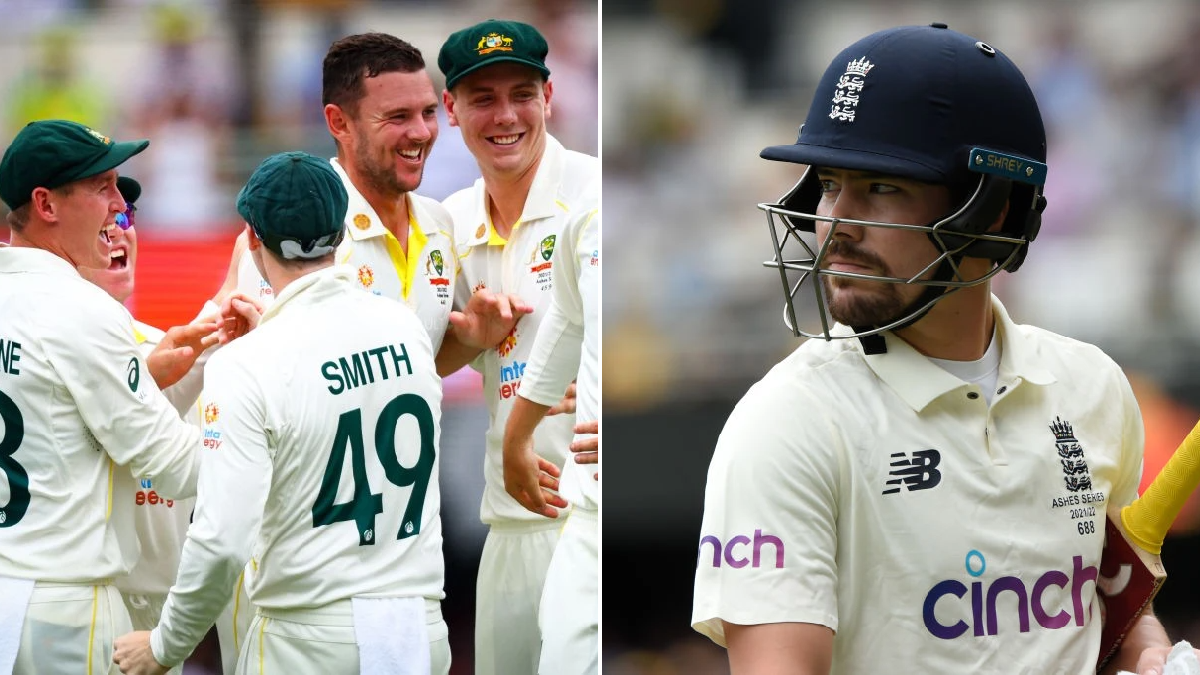 Australia enjoyed a dream start to their Ashes defence as England were bowled out for just 147 on day one of the first Test in Brisbane. Here’s everything you missed overnight…

The first ball of an Ashes series is one of the most anticipated events in the sport and Mitchell Starc produced a defining Ashes moment as he knocked over Rory Burns with the first delivery of the 2021-22 series.

The ball angled into Burns’ pads and the England opener could not get his bat down in time to prevent the ball from crashing into his leg stump. The Gabba roared and the tone was set for the rest of the day, and perhaps even the series.

It was only the second time in history that the first ball of an Ashes produced a wicket, with England’s Stanley Worthington out to the first delivery of the 1936-37 series. Perhaps England fans can take some comfort from the fact Australia went on to lose that series…

There was speculation Starc could be left out of the Ashes opener for Jhye Richardson – Shane Warne was among those calling for him to be dropped – but the 31-year-old showed his class with a threatening new-ball spell, before coming back to dismiss Jos Buttler later in the day.

When Ollie Pope came to the crease with the score 29-4, Australia would have felt they had a chance to bowl England out for under 100.

But Pope, and to a lesser extent Hameed, briefly frustrated the Baggy Greens and ensured England reached the lunch break with six wickets remaining.

Cameron Green bounced out Pope to claim his first Test wicket but England’s decision to pick the Surrey opener ahead of Jonny Bairstow already looks like the correct one.

England’s best period came when Jos Buttler joined Pope out in the middle, with the wicketkeeper frequently hitting Australia’s bowlers over the top and taking the score to three figures.

This was Buttler’s first red-ball innings in Australia and he was the only player to really trouble the hosts, scoring a fluent 39 before being caught behind by Paine’s replacement Alex Carey, who took three catches on his Ashes debut.

After England confirmed James Anderson would miss the first Test due to a niggle, they were expected to pick his long-term bowling partner Stuart Broad in the attack.

Broad has taken more than 500 Test wickets and dominated David Warner during the drawn Ashes series in 2019, but he too was left out is Brisbane, with England instead selecting an attack of Ollie Robinson, Chris Woakes, Mark Wood and Jack Leach.

Explaining Broad’s absence at the toss, Root said: ‘We are blessed with a very good seam attack and it was a difficult decision to make. There’s five Tests and it’s important they’re ready to go when called upon at any time.’

Australia will begin their first innings on Thursday morning after heavy downpours in-between innings prevented any more play on day one. England fans will certainly have mixed feelings about the delay.

While more rain over the next few days may allow Chris Silverwood’s side to avoid defeat in Brisbane, England’s best chance of getting back into the Test was to take wickets in favourable conditions.

The lights were on and clouds overhead as England prepared to bowl, and they could have troubled Australia late on day one. Instead, both teams will try again tomorrow.