Home » Сricket » The end of an era: The rise and fall of the Tim Paine captaincy

Tim Paine has played a key role in the rebuild of the Australian cricket team in the wake of the Cape Town ball-tampering scandal but, like predecessor Steve Smith, his captaincy tenure has ended in tears.

After more than seven years out of the Test team, Paine replaces Matthew Wade behind the stumps ahead of the 2017-18 Ashes series. Only months before, Paine was considering retirement from first-class cricket and a shift to Melbourne to work with cricket manufacturer Kookaburra, but Cricket Tasmania threw him an unexpected contract lifeline.

Paine had played only four Tests in his earlier incarnation but he becomes an important cog in Steve Smith’s team in Australia’s thumping Ashes win. Having battled a serious finger injury for many years which required seven rounds of surgery, his glovework was good, and he scores 192 runs at 48 through the five Tests. Paine also returns to the ODI side.

On an ugly and dramatic tour of South Africa, Paine replaces Smith as captain during the third Test when the latter is stood down after the ball-tampering scandal in Cape Town. After the investigation into Smith, David Warner and Cameron Bancroft, Paine is officially selected as Australia’s 46th Test captain, for the final match of the series. 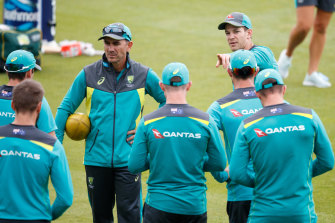 Tim Paine and Justin Langer with the Australian side at The Oval in 2018.Credit:PA Wire

Paine is named as captain of Australia’s ODI tour of England. In Justin Langer’s first series as coach, he and the former Test batsman lead a cultural overhaul of the team. The tourists are beaten 5-0 and Paine is replaced as ODI skipper by Aaron Finch. He is also dropped from the side.

Paine leads Australia in a Test series against Pakistan in the United Arab Emirates, with his team beaten 1-0 without the suspended Warner and Smith. The Australians head home and are beaten by India, in their first Test series win on Australian soil. The host nation rebounds with a 2-0 series win over Sri Lanka. 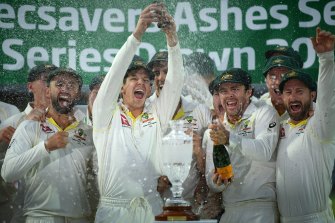 Tim Paine and the Australian side celebrate retaining the Ashes at The Oval in 2019.Credit:AFP

Having worked behind the scenes on reintegrating Warner and Smith, Paine leads Australia on an enthralling Ashes tour. England win the final Test to knot the series 2-2, leaving Paine as the first Australian Test captain since Steve Waugh in 2001 to retain the Ashes in England. Paine considers retirement but plays on. The Australians win all five home Tests against Pakistan and New Zealand, although Paine’s displeasure with the DRS system is clear.

The Australians seek redemption against India but again are beaten on home soil. Paine is fined by the ICC for dissent when questioning a not-out verdict via the DRS during India’s first innings in Sydney. He is also involved in a heated sledging clash with Ravi Ashwin during Ashwin’s match-saving hand, and grasses a key chance soon after. He later admits he needs to control his emotions better. 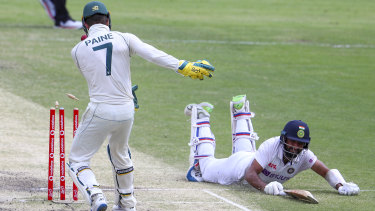 India’s Cheteshwar Pujara dives to make his ground as Tim Paine takes the bails off during play on the final day of the fourth Test between India and Australia at the Gabba in January this year.Credit:AP

Amid player concerns about Langer’s mood swings, Paine is involved in discussions with Cricket Australia which ultimately allow Langer to remain in his role. Paine requires surgery on a pinched nerve in his neck but declares himself fit for the summer.

A teary-eyed Paine steps down from the captaincy amid a sexting scandal with a former Cricket Tasmania employee.