Some of cricket’s eternal verities have been overturned by the modern age. “Never run for a misfield!” they used to say. Well, that had to be binned as soon as the limited-overs game began.

Yet there are truths that remain eternal, at least in Test cricket, and here is one: the best teams consist of old batsmen and young bowlers. Batsmen who are experienced that is, who have been there and done all that, and young bowlers – pace bowlers – who are full of youthful energy. 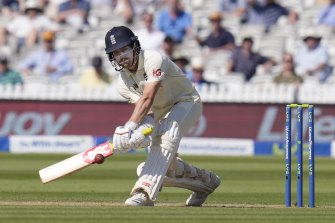 Rory Burns was left holding the baby when all the others had gone.Credit:AP

There is only one fundamental amiss with this England team. They have got it the wrong way round. The main pace bowlers are above 30, while the batsmen are green about the gills, and naturally so, as they are mostly in their early twenties.

England trail New Zealand by 103 runs going into the fifth day of the first Test at Lord’s, after being dismissed for 275 in their first innings. In their collapse to 6-140, only James Bracey of the younger generation was exonerated. It was a good ball that beat his forward defence. The best batsmen do not get bowled but at least Bracey did not get himself out, like Dan Lawrence, whose drive was as naive and artless as Zak Crawley’s before Friday’s washout, which is saying much.

Ollie Pope is a young man in far too much of a hurry. He was as artless outside off stump as Crawley and Lawrence, but had the luck to survive. In getting off the mark he steered a bouncing ball outside off stump past the slips – in England this shot makes the ball go down, in Australia it carries to slip – then threw the bat in a cover drive next ball that was every bit as high risk as those by Crawley and Lawrence, only Pope missed.

It is often the case when a side is packed with batsmen that they all subconsciously leave the responsibility to others, and indulge in higher-risk shots than they would have attempted otherwise. But there was a lot more to England’s collapse than that factor.

England have only two batsmen in what is considered, and proven, to be the best age-bracket for Test match batting, 28 to 32, the time when the physical faculties are married to the wisdom of experience. Rory Burns, 30, was left holding the baby when all the others had gone, and carried on for his third Test century after Joe Root had been dismissed by the day’s first ball. Compare the naivety of this line-up with the 2010-11 Ashes tour. Everyone was in his prime, except Alastair Cook who was nearing it. They had all played in Australia before, apart from Jonathan Trott, and had scored at least one Test 50 there (Ian Bell and Andrew Strauss), or 100 (Cook), or 150 (Kevin Pietersen) or 200 (Paul Collingwood).

How day four played out

New Zealand’s Tim Southee took six wickets while England opener Rory Burns hit 132 on his side’s way to being bowled out for 275 in the first innings, leaving them trailing the visitors by 103 runs at Lord’s.

Burns (132) kept the New Zealand attack at bay while the wickets tumbled at the other end at regular intervals, with four batsmen trudging back to the pavilion after being dismissed for ducks.

The opener led a painful but charmed life – hit on the head twice, thrown a lifeline when wicketkeeper BJ Watling missed a chance to stump him, and dropped by Southee in the slips off Neil Wagner when he was on 88.

England had resumed the day on 111-2 after rain washed out day three and Kyle Jamieson gave New Zealand the perfect start when he dismissed Joe Root with the first delivery of the day.

He forced the England skipper into a defensive shot, and the ball flew off a thick outside edge into the hands of Ross Taylor in the slips.

Ollie Pope (22) was the next to go after a solid start, missing an angled delivery from Southee that rapped him on the pads. The umpire demurred, but New Zealand successfully reviewed and overturned the decision.

Southee dismissed Dan Lawrence and James Bracey in quick succession with both batsmen returning to the pavilion for ducks.

At that point a follow-on looked distinctly possible, with England far behind on 140-6.

However, Ollie Robinson provided some resistance but was eventually dismissed for 42.

Mark Wood and Stuart Broad didn’t stick around long, but last man James Anderson frustrated the visitors, and he and Burns stitched together a 52-run partnership.

These batsmen on the last winning tour of Australia knew their own games inside out, knew the conditions, knew the bowlers. Nobody was wet behind the ears. The youngsters were the pace bowlers, whose energy and skill overwhelmed Australia’s batsmen.

It cannot be said that all of England’s bowlers attacked with energy here and for the third straight Test Stuart Broad brought little to the party – ever since, indeed, his field-day in Sri Lanka.

He should not have played here with Anderson, let alone been appointed vice-captain, which has painted England into a corner. If Broad is rested, or dropped, for the second Test, another vice-captain has to be found. It does not give the impression of smooth continuity and planning.

Craig Overton (a superior version to his first persona in Tests) would have provided a second bowler above the speed category of Anderson and Robinson. He would have brought more competitiveness than Broad currently does, and youthful energy. But the problem of batsmen who are collectively too young, and yet to know their game, is not so readily solved.