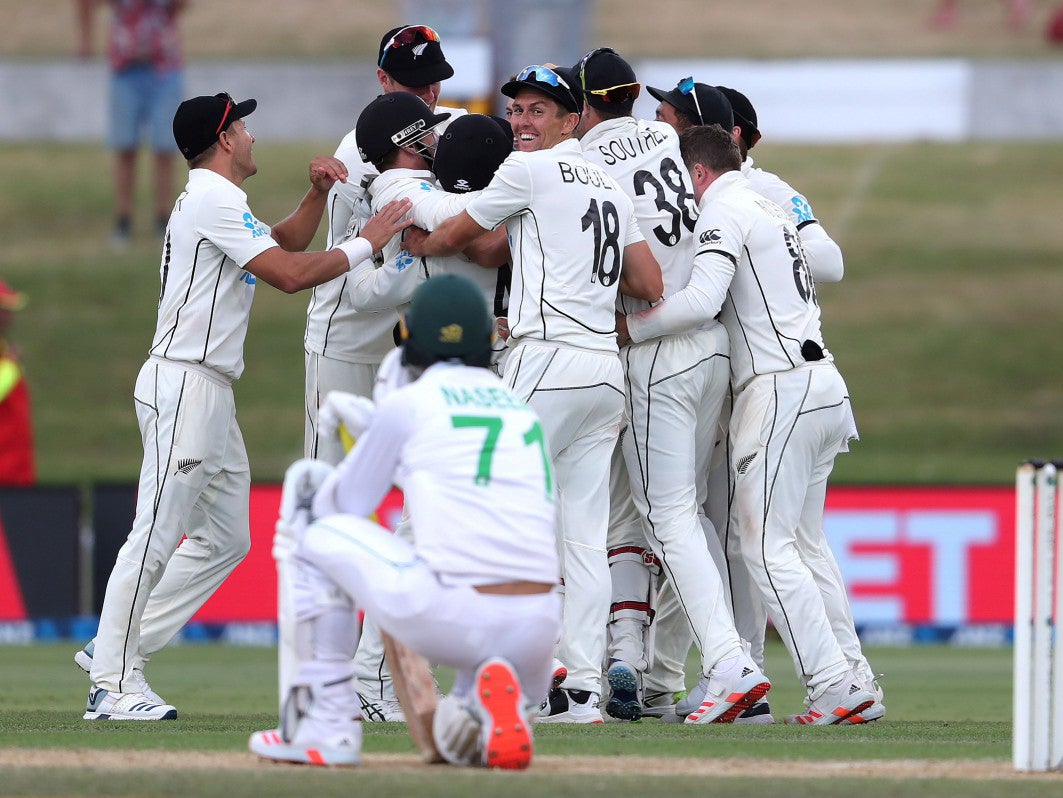 On 30 December last year the Black Caps entered new territory by ascending to the top of the ICC’s Test rankings. Two comprehensive wins over Pakistan capped off an impressive run that has seen Kane Williamson’s side win 11 of their last 15 series. Now that they’re looking down on the rest of the world, their former skipper believes some adjustments are in order.

“They should now be considered a big ticket globally,” McCullum tells The Independent. “We’re never going to be a big player commercially so I’ve always said performances will be what earns New Zealand the right to contest three, four, even five match series. Now they’ve done that. There is no disputing that.”

McCullum inherited the captaincy from Ross Taylor in January 2013 and in his first innings in charge watched his side get bowled out for 45 in Cape Town.

“We were underachieving, underworking, had too many egos and were probably overpaid for what we were delivering at the time,” McCullum says. “The New Zealand public couldn’t stand us. We weren’t representing the people like we were supposed to. That was a groundbreaking moment for us. We’d hit ground zero and had to rebuild.”

For three years, McCullum injected an intensity into the side while remaining true to his core values focussed on integrity and hard work. He explains how the tragic passing of Phil Hughes – killed by a cricket ball to the back of the head while batting for New South Wales in Sydney in  2015 – gave his side perspective.

“That changed how we went about our business and how we acted on the field,” he says. “We agreed not to engage with some of the profanities that others do. We would respect the opposition and respect the game because we knew we weren’t good enough to worry about anything else.

“And funnily enough, once we did that we were able to free ourselves up and the New Zealand public started to warm up to us for the reasons they always wanted to because we were representing them. Once that happened, good things happened.”

A World Cup final appearance in 2015 as well as a win over Australia in his final Test series in charge were standout moments of his tenure. Once he stepped down, there was only one candidate to replace him.

“I take my hat off to Kane because he was a reluctant leader at first but he was always the best equipped for the job,” McCullum says. “What he’s been able to achieve with this team, and how he’s shaped it in his image, has been amazing. If anything he’s more humble and hardworking and the team resonates with our New Zealand public. That’s all down to Kane’s leadership.”

Able deputies Tom Latham, Henry Nicholls and Ross Taylor have all maintained an average above 44 under Williamson’s stewardship, but it has been New Zealand’s bowling attack that has carried them to the summit of the game.

“They’ve got most things covered,” McCullum says of the arsenal at Williamson’s disposal. “You’ve got the seam and swing of Trent Boult and Tim Southee, who also offer the left-arm, right-arm variation. You’ve got the aggression of Neil Wagner and now the bounce and genuine skill of Kyle Jamieson. They’re still searching for that world class spinner who they can take abroad. But the guys who have filled in have done really well.”

Over the past two years, New Zealand’s pace quartet of Southee, Boult, Wagner and Jamieson have collected a combined 210 wickets at just 22.04 runs apiece. With England fielding seven different seamers in this time, only Australia’s vaunted trio of Pat Cummins, Mitchell Starc and Josh Hazelwood, with 174 wickets at 19.54, have a better record than the Kiwis as an established unit.

Apart from a possible final in the World Test Championship at Lord’s, originally scheduled for 10 June this year, New Zealand’s next five-day fixture on the Future Tours Programme comes in December when they take on Bangladesh in a two match clash. After that comes a two match series at home against South Africa before a three match tour of England in May next year. It will be the first time since 2015 that New Zealand will compete in whites in the country.

“It would be nice if we could play more Test cricket,” McCullum says, his voice heavy with resignation. “I don’t begrudge the Big Three [England, India, Australia] their standing in the game but it’s hard for everyone else to reach the heights of being number one with limited opportunities.

“That is something the ICC needs to rectify. The Test Championship is good but it needs work. New Zealand have earned the right to ask for more at the big table. I hope they get what they deserve.”