Home » Сricket » Twenty20 tweaks: DRS to be used in WBBL, BBL amid changes

Decision reviews will be available in 24 out of 59 Women’s Big Bash League matches this season, in addition to the long-awaited introduction of the technology to the BBL after years of complaints about umpiring decisions in the tournament.

Tournament organisers have also elected to ditch the “Bash boost” bonus point for the 10-over score reached by a chasing team and “X-factor” substitute rule after two BBL seasons. 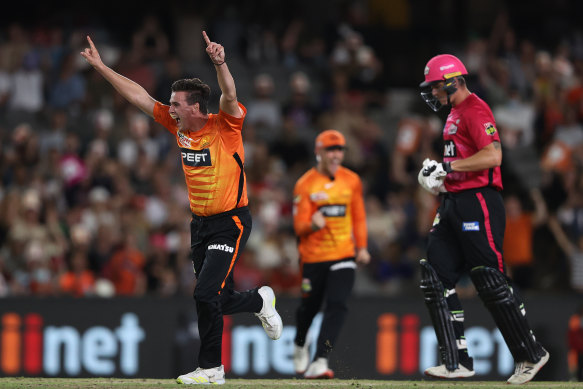 Decision reviews will be a feature of both the WBBL and the BBL this year.Credit:Getty

But the “power surge” allowing batting teams to nominate two overs with fielding restrictions will be retained and also added to the WBBL.

The 24 WBBL games with DRS are those provided with full broadcast coverage by Seven and Foxtel, including finals matches. The remaining 35 games are produced with live streaming-level coverage that does not allow for DRS.

Cricket Australia is optimistic that the next broadcast deal – due to be reached in 2024 – will afford full broadcast coverage of all 59 WBBL games each year.

The technology available for reviews will include ball-tracking for lbw decisions and Real-time Snicko to determine whether a batter has edged the ball or not. HotSpot, a feature of international cricket decision reviews in Australia, will not be available.

CA’s broadcast deal, splitting games between Seven and Foxtel, also means that both ball-tracking operators, Hawk-Eye and Virtual Eye, will be used in the same tournament, depending on which broadcaster is hosting.

Alongside the introduction of the DRS, BBL teams will be placed on a countdown clock to ensure that a fielding side commences the final over of the innings inside 79 minutes.

“Implementing DRS has been a challenging task for the BBL, which is the most logistically complex T20 league in the world,” head of the W/BBL Alistair Dobson said.

“That, plus the impact of the pandemic on travel and movement, have meant the technology has not been possible to introduce until this season.

“Additionally, the league is pleased with the outcomes of the wider playing conditions review process, with the introduction of the power surge to WBBL and the BBL innings clock both major wins for fans.

“We retain a clear desire to innovate and drive our leagues forward but are also willing to review decisions that have not realised the intended positive impact, such as the Bash boost point and X-factor substitution.”